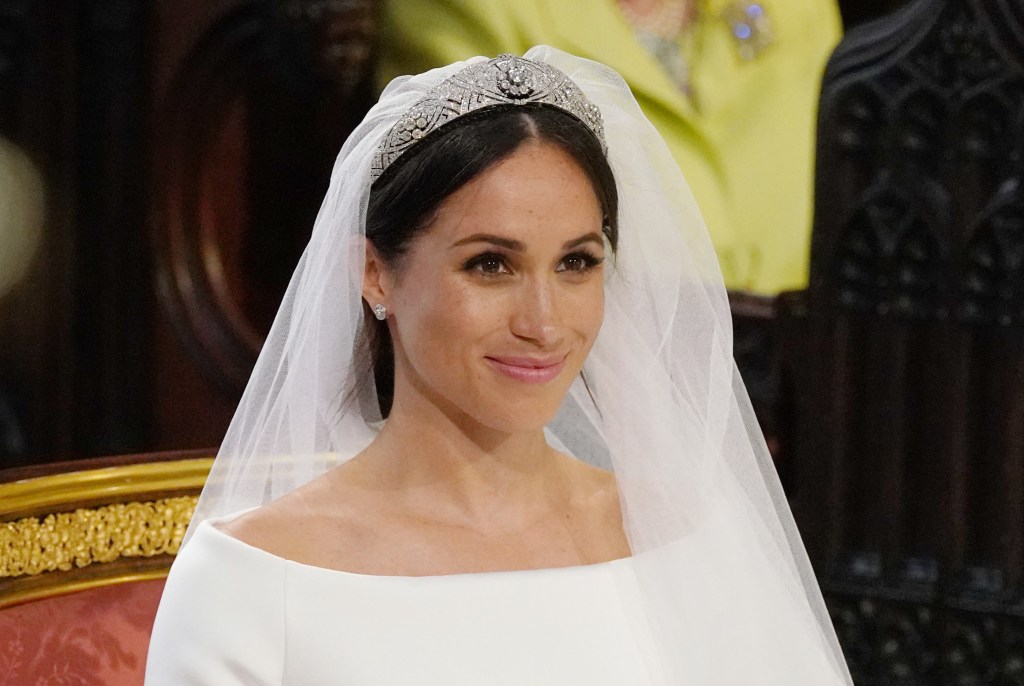 Is it possible that Meghan Markle's giggle party with Queen Elizabeth II during their first royal trip together in June was all for show? Is it possible that Prince Harry's American bride really did not charm his grandmother with his friendly, down-to-earth personality or their common love for dogs?

Two different sources coming out this week, Meghan, 37, painted as a bridal sister in the lead of her May 19 wedding, with a source claiming that she needed to have a special Tiara from the Queen's collection. In fact, the source said that Meghan's claim became so annoying that the monarch had to have words with Harry and tell him, "Meghan can not have what she wants. She gets what Tiara she gets from me."

The Bridezilla portrait begins with a new book by reporter Robert Johnson, revealing that Harry, 34, became "petulant and short-lived" before the May 19 royal wedding at Windsor Castle, reported Daily Mail.

According to the book, "Charles At Seventy: Thoughts, Hope and Dreams" told Harry Kensington Palace staff in an enlightened, "What Meghan wants, Meghan gets."

One of the things that Meghan had stated that her heart was putting on wearing a special tiara containing emeralds, according to another report from The Sun tabloid, quoting "a royal insider." Meghan had picked up this emerald headpiece during a visit to Buckingham Palace.

But Meghan, who now expects his first child with Harry, was told that it was not possible to wear this tiara because its origin could not be established, the insider told The Sun.

"There was concern that it could originally come from Russia," the source told The Sun.

Apparently, the former television star was not happy that she did not get the tiara election, which led to "a very heated exchange" with staff who in turn made the queen talk to Harry, said the inside.

In addition to the Queen's footing on the tiara question, the Queen also asked Megan's need to wear a veil, as it was her second marriage.

"The message from the queen was very much Meghan needed to think about how she talks to the staff and be careful about following family protocols," the insider told The Sun.

However, according to the insider, Meghan's treatment of palace staff also caused tensions with Kate Middleton, the Duchess of Cambridge and her sister-in-law.

"Meghan can be hard," the inside said, blaming her demanding attitude on her experience "working in a Hollywood environment."

For her wedding Meghan ended up wearing Queen Mary Diamond Bandeau, a platinum headpiece, made in 1932 to show off a removable brooch given to Queen Mary in 1893, according to Kensington Palace.

Of course, Meghan did not claim any of this dramatic drama when she was interviewed for an audio commentary included in the new show "Reliving the Royal Wedding" at Windsor Castle, reported Daily Mail. Yes, Meghan made it sound like it was her idea to choose Queen Mary Bandeau Tiara.

"When it came to the tiara of the day, I was very happy to be able to choose this beautiful art deco style Bandeau Tiara," Meghan said on the comment. "Harry and I had gone to Buckingham Palace to meet her Majesty Queen to choose one of the options there, which was an incredibly surreal day that you can imagine."

"And that's what I think when we tried them out," she added.

Who knows to believe in this bridezilla report?

But if this drama was going on, Meghan and Queen really showed that they had broken their differences and came swimming a month after the wedding.

That's when the duke in Sussex charmed the crowds and her mother-in-law as they traveled together to northern England to attend an event that marked the opening of a new bridge.

"They were Very Relaxed" Judi James, a leading body language and communications expert, told The Daily Mail after analyzing photos and videos of the two women together.

"At one point they giggled together as teenagers. The queen looked happy to be with her," said James. "The queen did everything right for her and made her look like a grandson or friend she is very fond of. "