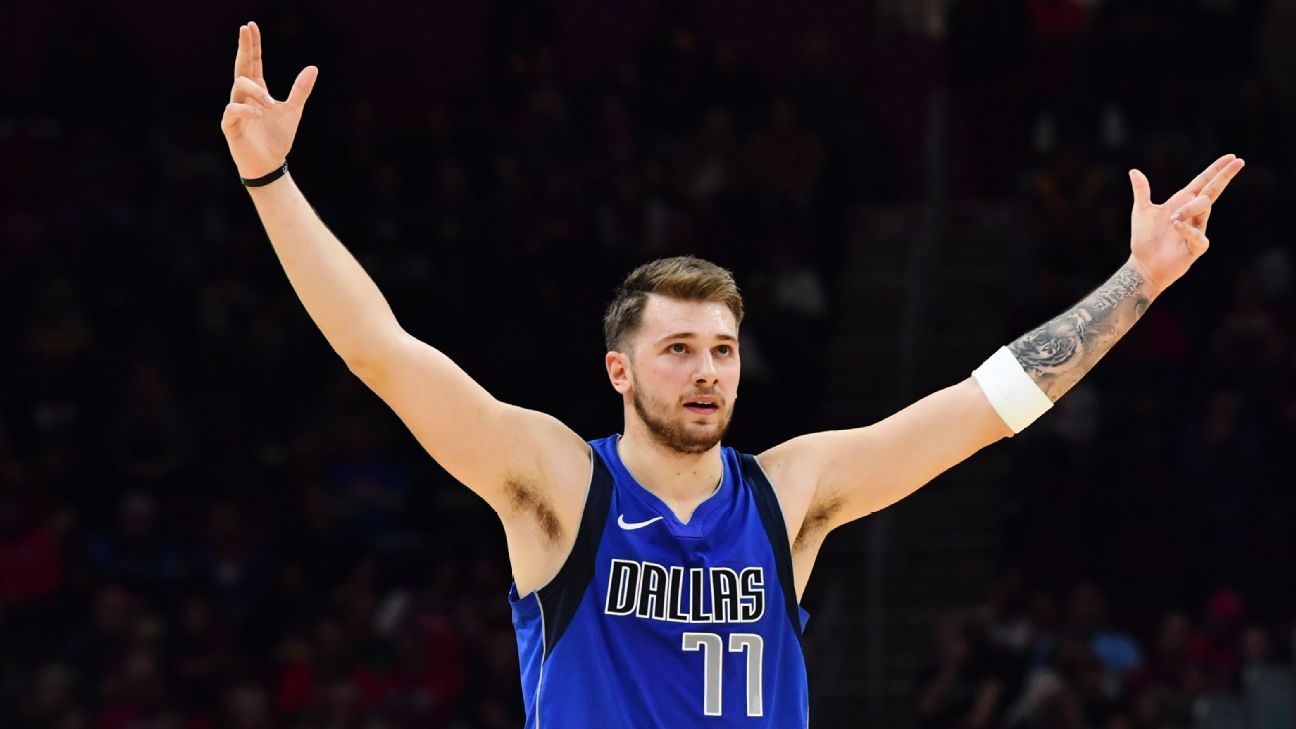 DALLAS – Perhaps the most impressive thing about Mavericks star Luka Doncic's stat line Wednesday night was that it wasn't surprising.

Doncic lit up the depleted Golden State Warriors for 35 points, 10 rebounds and 11 assists in the Mavericks' 142-94 win. Doncic exited the game for good with a few minutes left in the third quarter, playing only 25 minutes, 30 seconds, the least playing time in NBA history by a player to produce a 30-point triple-double, according to the Elias Sports Bureau .

This outing came on the heels of Doncic's 42-point triple-double in Monday's home win over the San Antonio Spurs, when he joined LeBron James as the only players in NBA history to score 40 points in a triple-double before their 21st birthday.

"Look, he's a very special player on a special role," Mavericks coach Rick Carlisle said. "There's not much else to say. This isn't a big news flash now. This is getting to be pretty normal."

It was Doncic's seventh triple-double of the season for the 9-5 Mavs, the most by a player in the first 14 games of a season since Oscar Robertson had 11 in 1961-62. Robertson had been the youngest player to record back-to-back 35-point triple doubles as a 22-year-old, but that distinction now belongs to Doncic, who won't turn 21 until Feb. 28th

Doncic has established himself as a legitimate threat to join Robertson and Russell Westbrook as the only players in NBA history to average a triple-double for a season. Doncic is averaging 29.9 points, 10.6 rebounds and 9.4 assists per game, and he is the only player in the league to rank among the top five in scoring and assists as well as the lone player to rank in the top 15 in all three categories.

"Unbelievable. But we were talking about if he can keep this up, and I was like, 'Yo, if anyone can keep this up, it's him,'" said veteran Mavs guard J.J. Barea, who serves as a mentor to Doncic. "He plays on the ground. He's super smart. He's shooting the ball well. He's finishing really well. I see him keeping it up.

"It's not hard for him to do this right now. He's not forcing crazy s —. It's just coming. That's why I think he can keep this up. He's making it look easy."

The first quarter against the Warriors appeared especially easy for Doncic. He had 22 points, five rebounds and five assists while playing all 12 minutes of the quarter, which ended with the Mavs leading 44-16.

According to Elias, Doncic became the first player to register more points, rebounds and assists than an opposing team in one quarter since the Philadelphia 76ers' Allen Iverson on Feb. 19, 2003, against the Chicago Bulls. Iverson had 10 points, six rebounds and three assists in a quarter in which the Bulls managed to score only eight points.

Doncic was 7-of-8 from the floor and 5-of-6 from 3-point range in the first quarter. He also only had his second dunk of the season, which he celebrated with a big smile while running through the Mavs bench as he got back on defense, much to the amusement of his teammates.

"He's out there having fun," said Mavs guard Tim Hardaway Jr., who had 20 points on 6-of-7 shooting in the win. "That's the most important thing in this game, is to have fun and go out there and compete on both ends of the floor. He's doing that."

With Doncic's name already being mentioned among some of the league's elite players, Mavericks general manager Donnie Nelson cautioned that it's not fair to compare him to NBA legends this early in his career.

"Luka is getting compared to all-time greats and it's nice, but he's 20 years old," Nelson said Wednesday night on ESPN Radio's Freddie and Fitzsimmons Show. "He's just starting his career out. He's got a long, long way to go, and we've had a soft early schedule. So I'm not going to be jumping on this all-time great this, that and the other. He's got the potential … yes … but he's got to win at the highest level. "

Doncic acknowledged that he is aware of the exclusive company he has joined with his historic production this season. However, he has no interest in discussing his individual statistics.

"I'm glad we're winning games. That's all," said Doncic, who was 11-of-18 from the floor and 6-of-10 from 3-point range in Wednesday's win, with the Mavs outscoring the Warriors by 45 with him on the floor. "We've got three in a row, and we've just got to keep going like that."