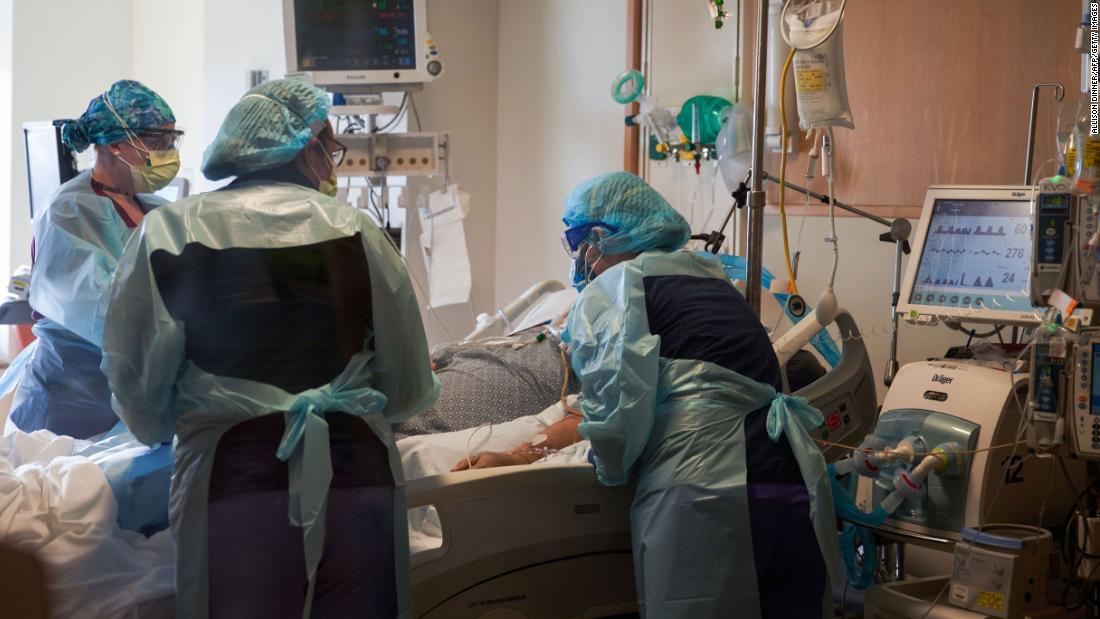 I say the very best case because we are so close to doing what, before the pandemic, would have seemed impossible: to create, test, authorize, manufacture and distribute not just one but several vaccines in an incredibly compressed timeline – certainly one of our latest medical achievements. We have also learned so much about the virus in real time and have new – and some old – drugs to treat it.

The worst case has to do with how the patient himself feels. Increasingly weak, vulnerable and critically ill. In the beginning, the disease was localized, easier to manage with a good prognosis. But over time, my patient did not always listen to the recommendations and the disease spread to all states in the country.

The United States continues to break terrible new records. On Saturday, the country topped a total of 14,542,000 cases of coronavirus and more than 280,000 deaths in total. On Friday, the country saw its highest number of new daily Covid-19 cases, more than 227,880, and more than 101,250 people were hospitalized with Covid-19, burdening health care systems in many states. And this is before we even know the full effects of the Thanksgiving holiday.

The past week has been so bad that, according to a calculation from the Institute for Health Metrics and Evaluation at the University of Washington, Covid-19 was the leading cause of death in the United States and eradicated coronary heart disease.

So despite the best advice, the best care, the patient’s condition has continued to deteriorate. And instead of being located in some hotspots that required aggressive treatment, as was the case in July, the infection has now engulfed almost the entire patient.

The reason it is so dangerous is that earlier in the pandemic, and even in July, there were a lot of built-in reserves and redundancies. If part of the body is in crisis, other parts of the body can take over and do the job of keeping the patient relatively stable. For example, we saw how in the spring and summer, when a place – like New York City or Houston – was overwhelmed, doctors and nurses came rushing in to help. Alternatively, patients can be transported from an overcrowded hospital to a less strained facility in a nearby region.

Terminations, escape hatches, reserves – call them whatever you want, but they no longer exist for the patient, the country. Now state after state reports that hospital systems are reaching their turning points. Not only are there fewer hospital beds available, but frontline and support staff – from doctors and nurses to orders to hospital cleaning staff – are getting tired, worn out and sick in more and more. And there is no one to replace them.

How long can the patient hang on?

When the human body is facing a crisis situation – whether it is an extraordinary infection, widespread bleeding or something equally catastrophic – there are all these biological defensive mechanisms that kick in gear, tricks that the body pulls to compensate for the systems that are out of balance. These self-preserving instincts are part of the reflective nature of our biology.

But this patient, our country, instead of compensating and trying to maintain balance at all costs, compensates and has shown little inclination to do what it can to prevent it from getting worse.

IHME predicted that states would respond when we reached the threshold of 8 people per million who die, and that the country’s defense mechanisms would be triggered, leading to measures such as home orders being reintroduced.

Eight people per million who die, amounts to about 2800 deaths per day – and we are already past that. But the country’s defense mechanisms have not recovered to the extent needed. While many people in this country wear masks and follow physical distance guidelines, for many it still does not.

Masking is still a political statement and is not mandatory in 15 states. Only seven states have any form of home orders, councils or curfews, which many battles have been waged over.

The resigning Trump White House began its holiday season this week, with more than a dozen group meetings planned, where the U.S. Centers for Disease Control and Prevention Guidelines for size restrictions, as well as Washington, DC, restrictions on indoor collections. Most of us missed spending time with our families during this high season, and I’m constantly on TV reminding people of the dangers of doing so. Yet the administration itself has already been the epicenter of at least three Covid-19 outbreaks among staff and allies, and a series of events such as holiday gatherings are likely to endanger hundreds of guests, workers and staff.

It is even when the American surgeon general Dr. Jerome Adams issued what became a basis on Fox News on Friday. “To all the leaders out there, we need to lead by example in the next few weeks and really help people get over the finish line because it’s in sight again,” he said.

And the end is really in sight. Help, in the form of one or more vaccines, is on the horizon. This patient, our country, will, of course, survive. But any impending vaccine, even if it is nothing more than a scientific and logistical miracle, will not be an immediate fix. It will take time, several months to six months, to distribute it to communities everywhere.

So the question we have to ask ourselves is: How many Americans are we going to let die in the meantime?

President-elect Joe Biden told CNN’s Jake Tapper on Thursday that he will ask Americans to commit to a 100-day mask as one of his first acts as president. On Friday, the US Centers for Disease Control and Prevention strengthened its recommendations for worm use and called it “critical” to control the spread of coronavirus.

According to the latest IHME model, the number of estimated deaths in Covid-19 could decrease by 66,000 on April 1 if 95% of people wore masks. Think about it. One of the lives saved could be your own mother, your older neighbors, your favorite musician or the next brilliant researcher. It can even be your life or mine.

In addition to wearing masks, we need to limit our operations and reduce the capacity of certain types of companies. A modeling study by researchers at Stanford and Northwestern Universities shows that a small minority of places people visit account for a large majority of coronavirus infections in large cities. And it suggests that a reduction in the maximum occupancy in such places – including restaurants, gyms, cafes, hotels and religious establishments – can significantly slow down the spread of the disease.

This type of movement will, or of course, cause the patient some pain – so leaders should be prepared to offer painkillers. In this metaphor comes morphine in the form of money for those who suffer, an economic stimulus.

One thing that has become clear. Our patient does not like to take small step-by-step steps like those described by countless public health experts. Instead, the patient, our country, likes the big, hail-Mary, big gestures. We are quick fix, shortcut society – always hoping for the magic cures and drinks, instead of leaning into the simple effective tools, which require a little more work. As a result, my patient does not want to wear a mask and skip the holidays with family and friends; they just want a vaccine to speed up and revive us as usual.

Our human spirit has made us innovative, creative, resourceful and persistent enough to see this dream of a vaccine bear fruit. But it is our human behavior and biological reflexes that will dictate how deep our wounds finally go. No amount of science can save us from ourselves.

I can only hope that the country’s self-preserving instinct begins soon and long enough to get as many of us across the finish line as possible.