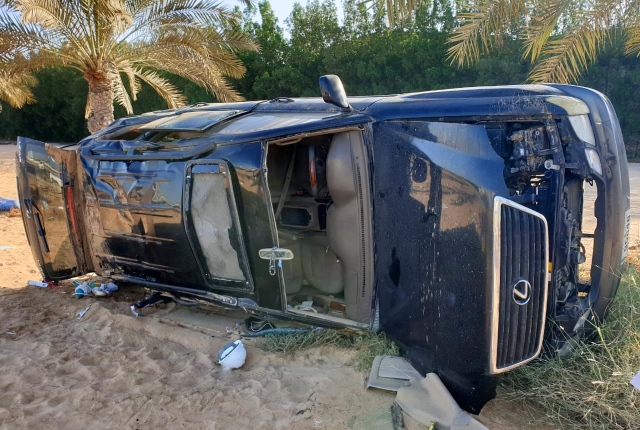 An accident on the Hamriya-Umm Al Quwain road led to the deterioration of a 7-wheeled vehicle with the death of one of its passengers while others were injured between the medium and the less as a result of the driver's attempt to avoid colliding with a riot on the road.

According to Col. Ali Saeed Al-Jallaf, Chief of Al-Hamriya Police Station, who supervised the incident on the ground, said: "We received a message at 07:45 today that a four-wheeled vehicle belonging to Lexus Station was on Hamriya Road to the Emirates in Umm Al Quwain Immediately after the message was received, the center patrols, the national ambulance, the accident commission and civil defense rushed to the scene to handle the incident immediately. The broken vehicle contained seven "workers" of Asian and African nationality. The damage varied from funds to smaller ones. The event, the injured, were immediately transported to Wa-Khalifa Hospital in Ajman.

Colonel Al-Jallaf explained that the main cause of the deterioration of the vehicle according to the driver's statement was the attempt to avoid colliding with a loose animal on the road, which caused the vehicle to deteriorate and injure. The affected entities treated the incidents professionally, to deal with the accident and the injured, On site to ensure smooth traffic and no other accidents between vehicles on the same road.

Sharjah police regret the incident and urges drivers to expose caution and caution when driving and paying attention to the road's movements and surprises and wants safety and security for all.