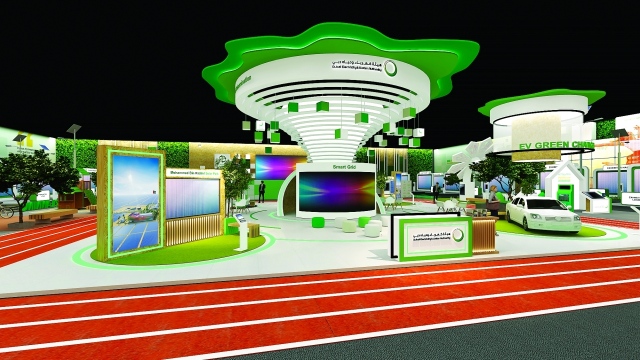 The Dubai Electricity and Water Authority presents a group of its most prominent and groundbreaking mega-projects through its main platform during the twenty-first session of the Water, Energy and Environment Technology Exhibition (WETEX) and the fifth session of the Dubai Solar Energy Exhibition, organized by the Authority through a virtual online platform, under the kind guidance of His Highness Sheikh Mohammed bin Rashid Al Maktoum, Vice President and Prime Minister and Ruler of Dubai, may God protect him, and under the protection of His Highness Sheikh Hamdan bin Rashid Al Maktoum, Deputy Ruler of Dubai, Minister of Finance , and Chairman of the Dubai Electricity and Water Authority.

His Excellency Saeed Mohammed Al Tayer, CEO and CEO of the Dubai Electricity and Water Authority, founder and president of the exhibition “WETEX” and “Dubai Solar Energy”, confirmed that the carbon-neutral 3D version, the first of its kind in the Middle East and North Africa , gives exhibitors a new experience. And visitors from all over the world, and it enables companies to display their products in an innovative way through three-dimensional platforms specially designed to suit each company’s needs, as well as the opportunity to hold meetings and participate in seminars and workshops based on the latest smart technology in this area.

Visitors to the exhibition can visit the authority’s booth without having to travel to learn about Mohammed bin Rashid Al Maktoum Solar Park, the world’s largest solar energy complex on a site, which includes the world’s tallest solar tower, with a height of 262.44 meters, within the fourth phase by Mohammed Complex Bin Rashid Al Maktoum solar energy, which combines the two technologies concentrated solar energy and solar cell energy according to an independent producer system, with a capacity of up to 950 MW.

The complex will have a production capacity of 5,000 megawatts by 2030, with an investment of 50 billion dirhams. The platform also includes the sail building, which is the tallest, largest and smartest government building with zero energy in the world, as the building’s total energy consumption will be equal to or less than the energy it produces throughout the year. The total renewable energy that will be produced by the building will be more than 6,500 megawatts of electricity annually, as solar cells will be installed on the roof of the building to occupy an area of ​​more than 20,000 square meters, in addition to more than 1,000 square meters of integrated solar panels.

The authority is also examining on its platform the hydropower plant to generate electricity using the water stored in the Hatta dam, the first project of its kind in the Arabian Gulf region. The hydropower plant has a production capacity of 250 megawatts and a lifespan of 80 years.

The platform also includes the four-legged automatic robot (Spot), as the authority is the first service institution in the region to use this robot in its internal operations, including identifying faults, testing connection points in high-voltage cables, detecting leaks in water pipes, conducting surveillance and safety patrols and ensure. From matching construction work to specifications with the help of multi-angle cameras, help with managing various facilities such as warehouses and others, in addition to helping people with determination.

In addition, visitors to the platform can watch a lot of videos and download brochures highlighting the agency’s most important initiatives and projects, such as the Research and Development Center, Innovation Center, the “Electric Car Green Charger” initiative, the sail building, the second round of “Solar Decathlon Middle The East “competition and the hydropower plant. El i Hatta.

Follow the UAE news from the statement via Google News

Robbie Williams is planning a new band – Our Lives – Destinations