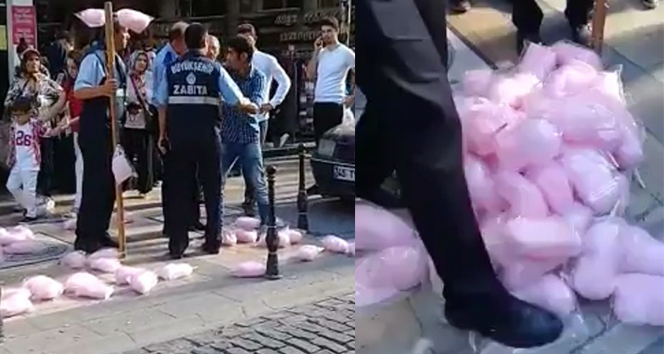 The event occurred in the Bayramyeri district of Denizli province Merkezefendi. In the event that occurred in November 9, Denizli Metropolitan Municipality, which conducts inspections in the region, went after a young man sold cotton articles. Teams that took the youth near the Bayramyeri square tried to prevent their teens from reacting to the young man's reaction by pulling the stick with cotton items in his hand and bending his arm backwards. Cotton god released on the ground while being thrown to the road. Although it was not in the pictures, it was learned that the kid had escaped from the police.

"Why do you sweep over 3 children?"

Meanwhile, one of the police tried to destroy the sweets of cotton falling on the ground with their feet. Officer of this movement of the people in the "blessing that explains why you crush" in terms of reaction. If the woman who attracted the pictures asked the officers, why do you sweep on the child? he asked. One of the police responded to the woman who saw a cell phone. The woman continued to show the incident without paying attention to it.

Alar They held the child as if they caught the terrorist "

Samet Saha's trader in the region experienced the event and said that they were very sorry for the incident and could not give an opinion on why. Sajin said, sat That child constantly sells cotton candy. Suddenly the police came and took their hands. The child's hand was held in the back of the child in "leaving," he finally said the breadboat. Then they threw them all out (cotton stuff) on the ground. Citizens, all responded to the crushing of cotton sugar. They were hard at the child, left candy and fled. We reacted to the crushing of sugar. We tried to gather from the place we were surprised, so that the blessing after all, he said.

Metropolitan Municipality :: We are not pleased to be crushed on the ground Büyük

Denizli Metropolitan Municipality Directorate of Municipal Police Department, officials involved in the incident in connection with the incident, said the investigation was started. The authorities expressed that they are sad because of the incident, especially the sugar, ie blessing on the ground was not happy with the crushed.
The authorities also stated that the child was 21 and there was no child. Lastly, not only for the young in the city, but no peddlers were allowed to intervene in cases where they intervened.