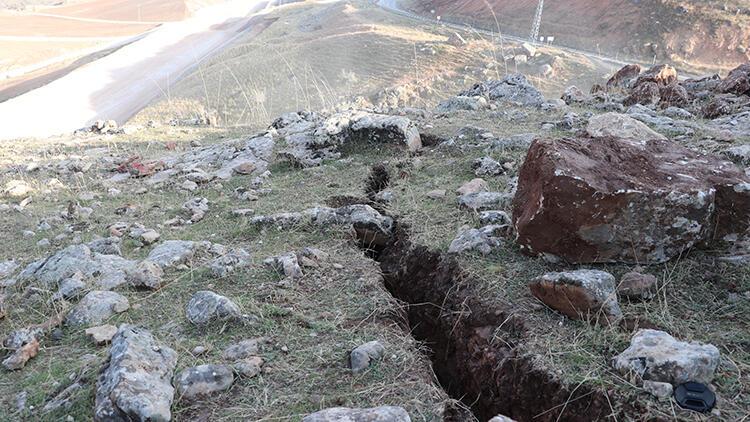 The earthquake with five magnets that took place on Thursday at 08.45 in the district caused deep cracks in the mountain slope in the location of Oyacık village between Siirt and Kurtalan, which was considered to have crossed the inactive fault line.

The previously observed cracks in the area where road works were carried out were transformed into deep and long cracks after the earthquake.

Bulent Dayan, one of the workers in the road construction industry in the region, told Anadolu Agency (AA) that he saw steam coming out of the cracks about 45 minutes before the earthquake.

About the fact that the cracks also existed before the earthquake, but with the earthquake they turned into deep cracks, Dayan said: “We saw that steam came out here 45 minutes before the earthquake. We worked here with a construction machine. After this steam we gave the necessary information to our “Then we observed vertical blows in these cracks that continued for 200-300 meters, then an earthquake occurred. When we came here we saw that deep cracks formed here,” he said.

Sandıkçıoğlu said the splits corresponded to the southeastern part of the area where the earthquake occurred.

Indicating that they had received information that cracks had previously been marked in the region by the road construction staff, Sandıkçıoğlu continued as follows:
“We got the news that this rift opened even more after the earthquake. That’s why we came here for investigations. We observed vertical blows in these gaps that continued 200-300 meters in our investigations. In some parts of the continued parts we noticed that this vertical slippage “One thing we are aware of is its depth. It continues up to about 40 meters. In addition, we have seen that the slit is 20 centimeters wide in places.”

Its connection with collapse can be investigated

Explaining that they saw that Kurtalan and its surrounding faults were not active according to the live fault map from the Mineral Research and Exploration (MTA), Sandıkçıoğlu said, “In addition, the relationship between this gap can develop in parallel with the faults with the fault or with mass movements and collapse due to karstic structure can be examined. ” sa.

Sandıkçıoğlu remarked that Turkey is in a seismic zone, so be prepared for earthquakes and added that the measures should not be left to the left.