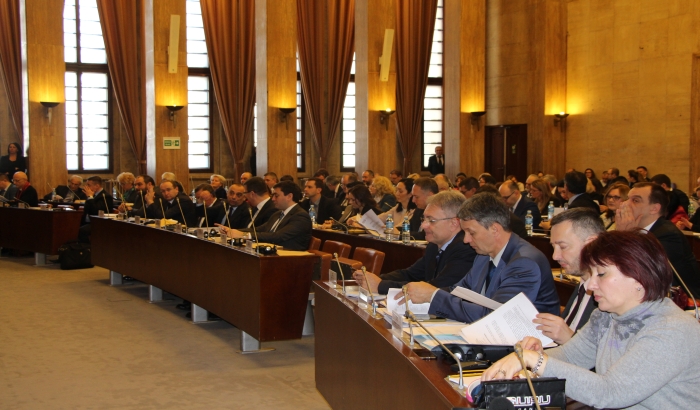 Yesterday's meeting in Vojvodina began, just like any ordinary session, by responding to parliamentary questions about government work. The Vice-Clock serves as a tool for all deputies who are interested in what the Provincial Government does with their secretaries, and the parliamentary question on the form is a control tool each alternate has. Live, broadcast on RTV and visible to citizens, there is the opportunity to discuss answers to questions raised and request submissions, and at each session there are three to six questions. Since the members of the ruling majority have asked more than 80 questions about the government's work, the opposition MPs in the Vojvodina Assembly believe that their vote is actually terminated because all of these questions will be answered at the end of the mandate.

Bogaroški: Abuse of rules of procedure to promote provincial government

Chairman of the LSV parliamentary group in Vojvodina's Assembly Branislav Bogaroški says for 021 that the idea of ​​such sudden activity of the ruling coalition's deputies in the Vojvodina Assembly (made by SNS, SPS-JS and SVM) is an obstruction of the opposition's work and its marginalization until the end of the mandate, with emphasis on this convening promotional activities.

"We have between 10 and 12 sessions in the congregation annually and the maximum number of 60 parliamentary questions can be answered to the highest. In terms of things, the members of the ruling majority prevented by placing more than 80 questions, in fact, the opposition to asking questions at the end of the mandate. In addition, some of the issues raised by the opposition have already been established, but were rejected, saying that this was not within the jurisdiction of the provincial government. When the authorities ask questions, they are obviously. This is an obvious violation of the rules of decent behavior in the congregation and is not at all correct. They have parliamentary law, but they completely proclaimed it ", says Bogaroški for 021.

He adds that if there is a current subject within the county government, this issue will not be on the agenda for the next six to ten months – or never.

"Why is an alternate for the majority must ask the province that he chose what is happening in his municipality? So far, so far, has been announced in the parliament of Serbia by proposing an amendment to their own proposals. The template was transferred to the province", adds Bogaroški.

Stjepovic: So far we have been an example of democratic work

Vice Chairman of the Vojvodina Assembly and Independent Member Ivan Stijepović says for 021 that the deputies of the ruling majority now remember that they were entitled and obliged to govern the government's work. He emphasizes that these opposition activities will now be invisible to the public, who will listen to the ministers of the provincial government's Igor Mirovic at the end of the mandate.

"So far, we have really been an example of how the congregation could work – in 90 percent, the Rules of Procedure are correctly applied, In Vojvodina's parish have or have certain basic parliamentary rules for democratic dialogue, which are usually applied in the world, so far existed. Finally, with these parliamentary questions, the government, or the Serbian Progressive Party, apparently abandoned all possible and written and unwritten rules for good parliamentaryism and what is called a democratic debate. Any form of opposition advertising will be suppressed and we have no general view of communication about what we think and which is not good at the ruling majority's work ", stresses Stjepovic.

When asked if parliamentarians can answer the written response of the provincial government to the elevated parliamentary question, he adds that he can not – in response, the requested response is often not stated, but something else, to circumvent the provision of the requested information.

"Therefore, vice-watch is important. We can request clarifications directly at the session and get the answers to the questions. We will not be able to do it anymore because the Provincial Government spreads its propaganda through its MPs", says Stjepovic.

Jovanov: Press on parliamentarians takes place, everyone is entitled to do their job

Chairman of the SNS parliamentary group in the Vojvodina Assembly Milenko Jovanov says for 021 that there is no word about abuse or violation of the Rules of Procedure and that each member, regardless of the party's determination, had the opportunity to ask a parliamentary question.

"Each member of parliament represents the citizens of Vojvodina and tries to present to them what is happening and planning, what has been or has not yet been done. For the first time, we come to the situation that someone puts pressure on parliamentarians who do their jobs just because they do their own jobs. If the members of the ruling coalition do not ask questions then they come from the same opposition to criticism because they are only here to give a quorum and press the keys. When members of the ruling coalition work and ask questions, they hinder the congregation, do not give others the right to speak … What we do not allow is to discriminate against deputies, whether the authorities or the opposition – everyone is entitled to do a job that has his rules of procedure some ", emphasizes Jovanov.

He adds that in yesterday's session, "a terrible insult to members of the ruling coalition was brought out".

"The opposition has said that the parliamentarians who asked the questions can not compile them to the provincial government themselves, but the government writes to them the questions they are just reading. The resistance, after all, about the impossibility of coming out of the speaker's speech from the congregation's speaker is a paradox that shows enough what the situation is. We can not change the right to do our job, nobody or representatives of the opposition. I know that in the previous mandate, the opposition representatives did nothing, they often did not participate in the debate, an MP said and so on. Now it bothered them when there are discussions and the sessions last longer ", says Jovanov.

Otherwise, some of the issues arise from 55 deputies: how much the hospital has been renovated and equipped, how many roads in this mandate have been built, how many students are co-financed … Over the next one and a half years, the representatives of the Provincial Government will give their answers in each regular session.

The meeting of the Vojvodina Assembly, which began yesterday, continues today with the main theme for the implementation of the budget during the first nine months of this year.

Downloading of parts of the text or the text as a whole is allowed without compensation, but with compulsory source list and link to the original text at www.021.rs. Downloading images is only allowed with the author's consent.

Kuni test: Price three euros, and the result in just half an hour VIDEO

“20 GIRLS STAND, AND OWNERS DECIDE WHO SHOULD …” The affair of “the café in Bujanovac” shakes reality, and this is STARLETAR FOR PROSTITUTION

THE QUESTION OF THE REPORTER’S SHIELD IS RESOLVED! The old man attacked Sanja because of Sha, and this person could have caused his marriage to break down! (VIDEO)

The mask for Tesla’s expansion in Europe: It would make sense to make a compact car

An endless column of fans who want to say goodbye to Diego! VIDEO