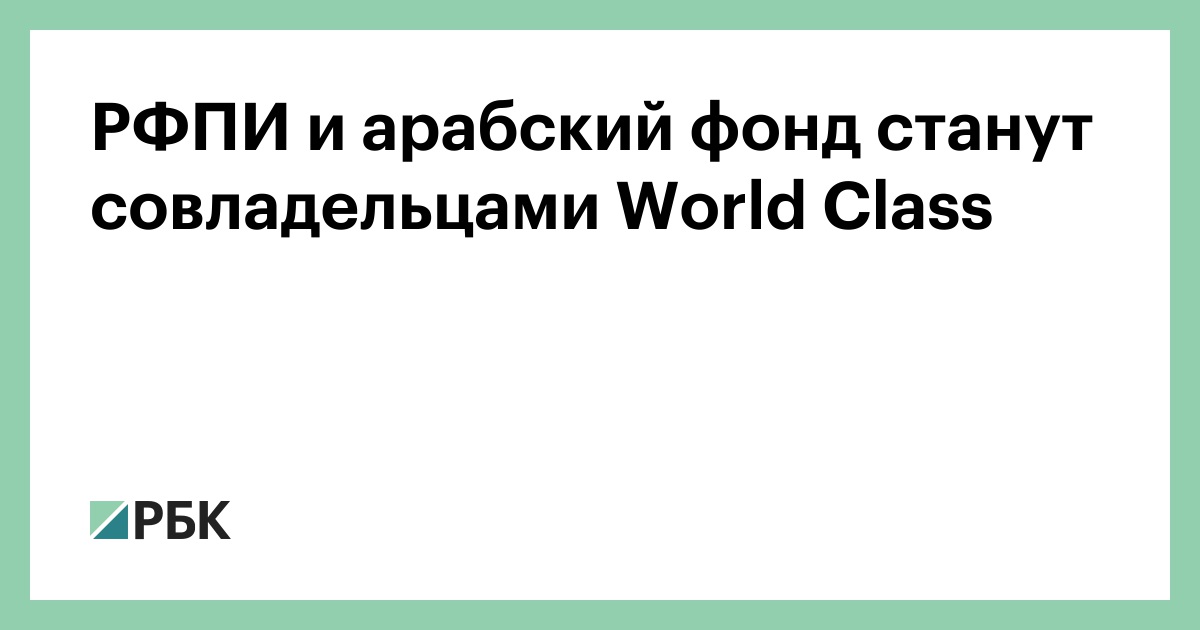 RDIF and the Arab sovereign fund Mubadala have agreed to buy 22.5% of the Russian training group developing the World Class network. The seller – "VTB Capital" – reported a good return, and the new investor can count on a stock market introduction 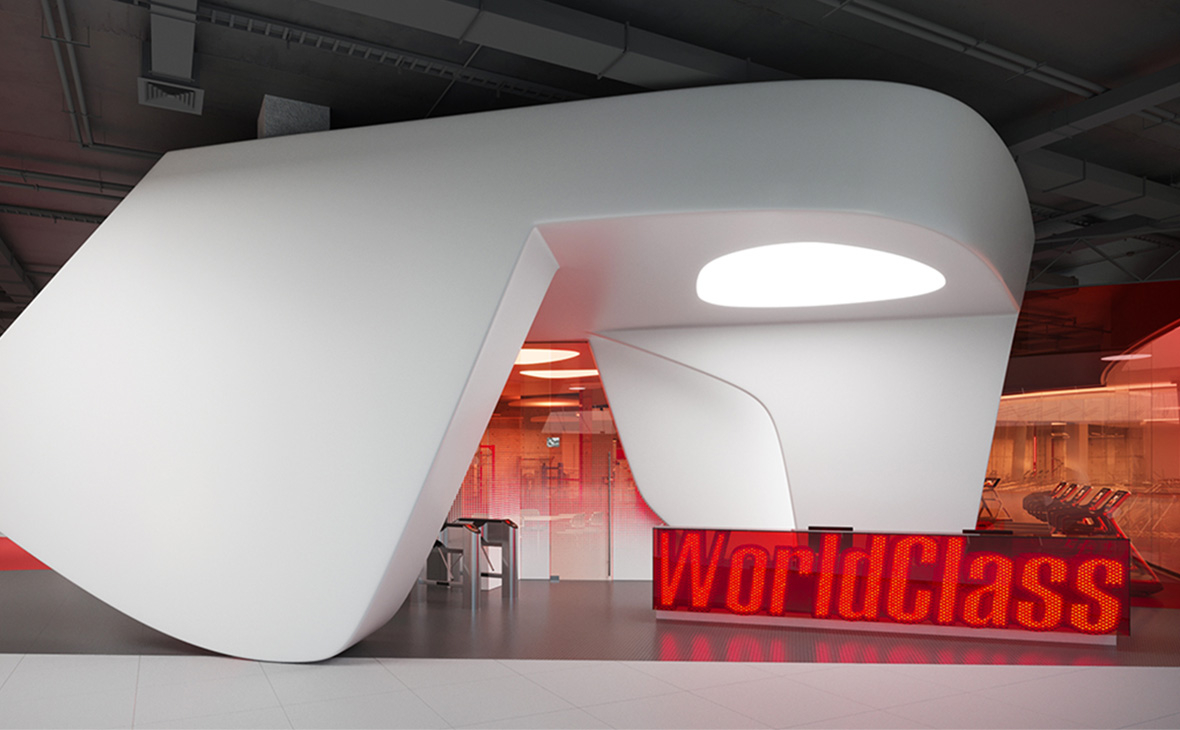 A consortium of Russian Direct Investment Fund and Mubadala Investment Company agreed to acquire 22.5% of the Russian Fitness Group (RFG). The package was sold to VTB Capital (an investment unit for VTB Group), the parties said. The rest of the shareholder structure has not changed: Olga Slutsker (32.6%) retained control, Maxim Ignatiev owns 20%, Goldman Sachs owns 24.9%.

Why did VTB reject the sports market and why needed an Arab fund, RBC understood. 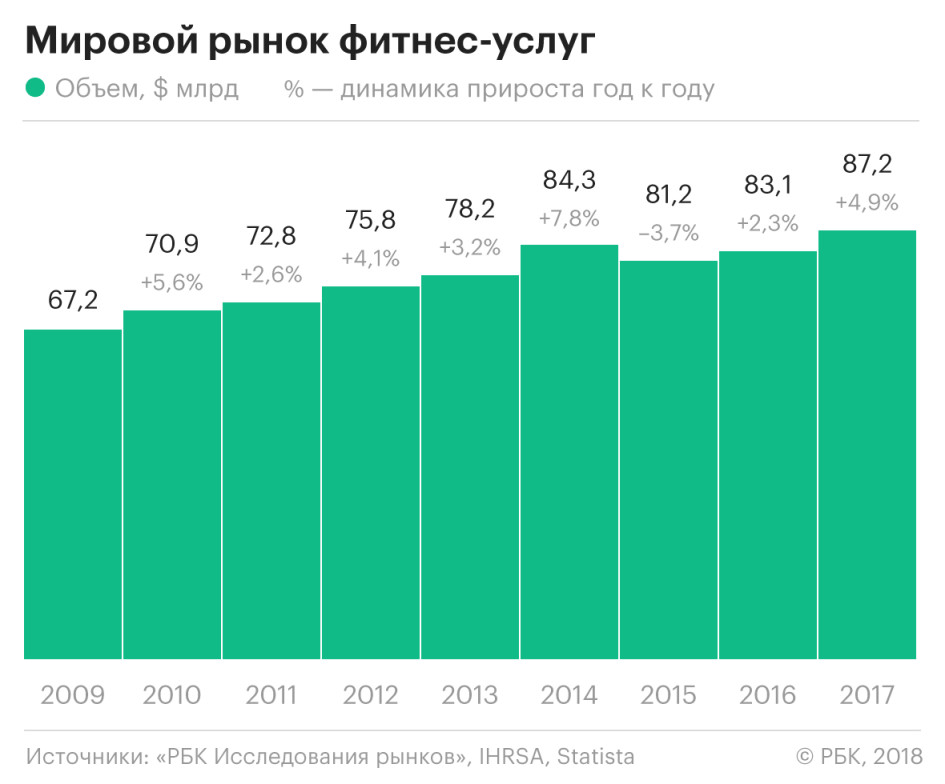 Why did VTB decide to sell its package?

VTB Capital joined RFG in early 2014. Since then, the bank and Goldman Sachs, already a minority owner in the company, bought together 50% of the Group. For its part of the package – 22.5% – "VTB Capital" paid $ 19.3 million (or about 700 million rubles at that time), the bank later wrote in its statements. Investors explained the interest in the sports industry with "great opportunities in the Russian market for training services".

But it was 2014 that was a turning point for the Russian fitness industry: if the annual growth rate was double-digit – 13.6-19.5% by 2015, the segment increased with a more modest 3.6% to 107.1 billion rubles, followed by the data from RBC Market Research. In 2015, RFG was led by Nikolai Pryanishnikov, a former CEO of VimpelCom and Microsoft. He acknowledged that mid 2015 was "very difficult". Although the company managed to retain its existing customer base, the number of new customers decreased (60% of RFG revenues – this is the sale of club membership). At the same time, during the crisis period, the company became indebted and increased efficiency. Shortly before VTB Capital's rise as a shareholder, the Group's EBITDA margin may be 12.9% (such data was communicated by UBS to investors prior to the transaction). In 2015-2016, according to Pryanishnikov, this figure was already 15-20%. 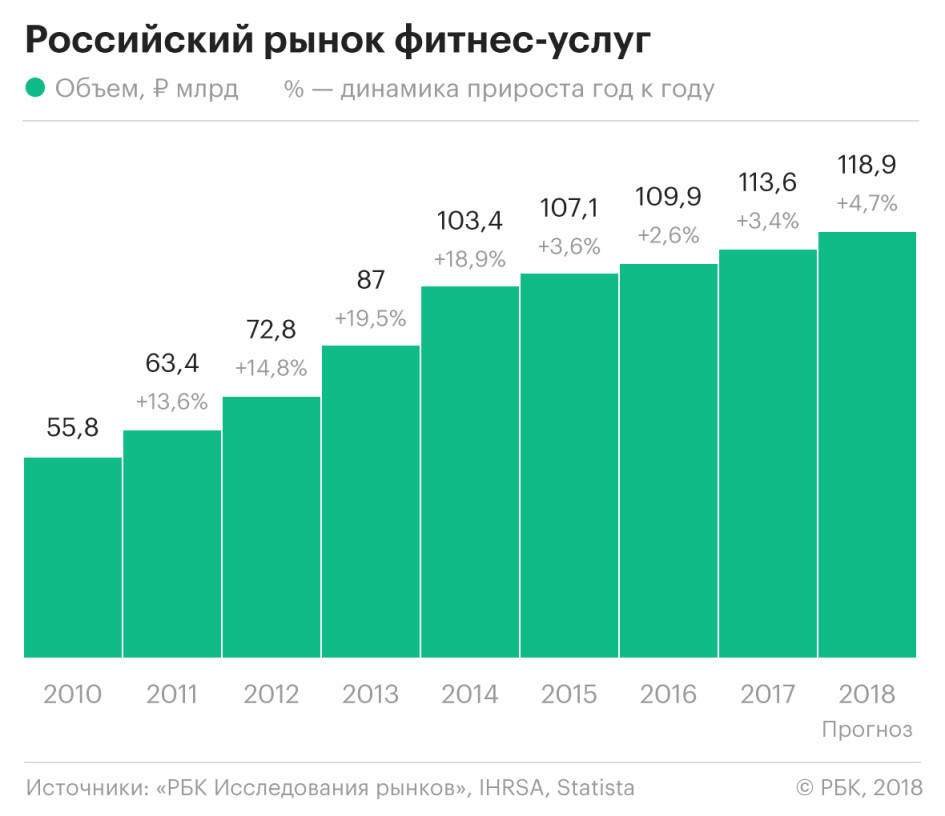 At the beginning of 2017, they began to talk about VTB Capital's intention to leave sports activities. In March last year, VTB did not officially exclude the opportunity to sell. "There are interested," said Vice Chairman of VTB Board Yuri Soloviev. – World class is a very good company, even in the context of the crisis. It's good that people care about their health. "One of the sources of RBC argued that the investor" began to worry about the slowdown in market growth due to the crisis. "For VTB Capital, the most important point in deciding to withdraw from the company's shareholders might be that the company expanded in 2017-2018 primarily at the expense of franchise partner, says General Manager of INFOLINE Analyst Mikhail Burmistrov. 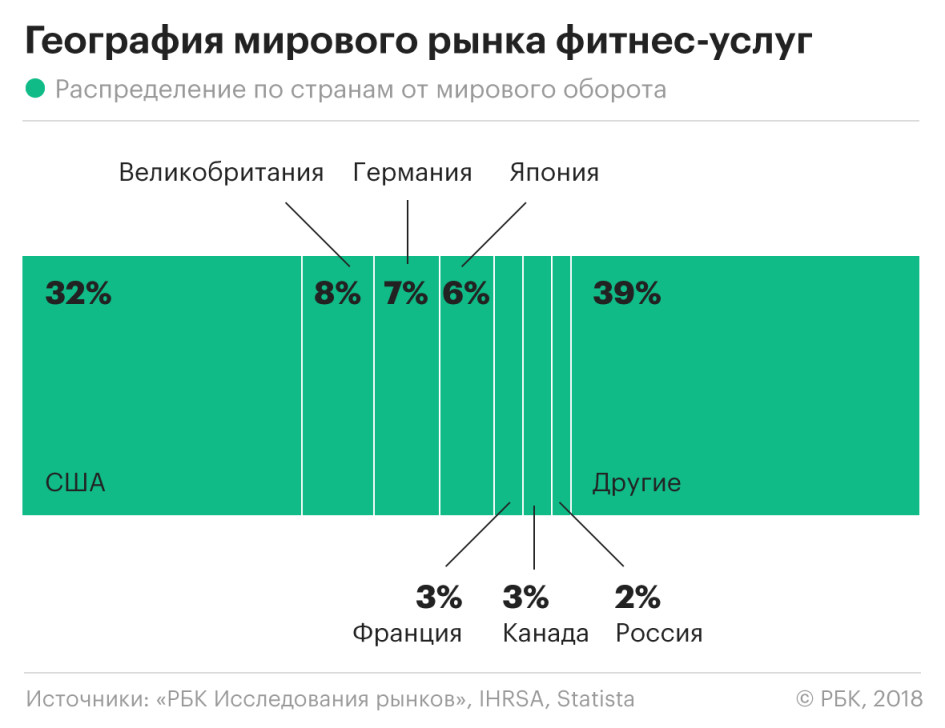 One of the options for VTB Capital to be released from RFG could have been a public offering under another RBC source, but the recent stock market situation "could not provide sufficient profitability."

How much is world class

How much the bank earned on investment in RFG, the parties did not reveal. VTB recalls that the standard investment horizon in such projects for VTB Capital is three to five years. "This transaction has been successful for us – the profitability achieved by VTB Capital is in line with expectations of investing in low-risk premium companies, such as World Class," noted VTB.

According to Burmese Province, the cost of the VTB package is at least 2.2 billion rubles, the entire company can be estimated at about 10 billion rubles or 12 EBITDA in 2018. Falcon Advisers managing partner Igor Kovanov evaluates the entire RFG: "Now the largest Russian companies in the consumer industry, for example, Magnit, X5 Retail Group, M.Video, estimated at 5 EBITDA, which of course is cheap until recently, estimates were approximately 10. Investors focus on these multipliers, and it is psychologically difficult for them to buy smaller companies into one higher cost, "he said. According to him, the multiplier in the assessment of the entire RFG's business was about five, no more than seven. Assuming that the Group's EBITDA was at the crisis level (702 million rubles 2013), then the transaction with VTB Capital could be in the overall company's assessment of 3.51-4.9 billion rubles.

What is Russian fitness group

RFG includes networks of World Class and World Class Lite fitness clubs. The company operates 39 own and 46 franchise clubs in 34 cities in six countries. According to RBC Market Research, the Group's revenue in 2017 amounted to 8 billion rubles, an increase of 1.5% compared with the previous year and net profit decreased by 10% to 456.6 million rubles. According to INFOLINE-Analyst estimates, RFG revenue in 2018 will exceed 8.2 billion rubles. (an increase of 2%) and net profit exceeds 500 million rubles. (an increase of 9.5%). The company is the largest company in the Russian market for training services – it takes about 7% of the market.

RDIF and co-investors intend to increase the investment in RFG for "growth and strengthen its position in different market segments and create the conditions for sports development, increase access to fitness and organized physical education and promote a healthy lifestyle and finally improve the quality of life of the population in Russia", explained for the RBC in the fund its interest in the fitness industry.

The group's growth, as represented by the RDIF, is possible both organically and through mergers and acquisitions. Whether the funds have the opportunity to increase their share did not specify the new investors. The investment horizon for such projects in the fund is estimated at five years.

According to Burmese Province, the Russian fitness group is a highly profitable and transparent business without debt, with international ambitions, and it is not surprising that the Arab Investment Fund has become interested in the asset. According to the expert, the company has good conditions for development abroad, both in the CIS countries and in Europe and Asia. It has proven to be successful in foreign projects, and the arrival of an international investor will give it another impetus for development. The Arab Fund functions as a portfolio investor in this transaction, and the interest for a financial investor such as RDIF may consist of the value of the package or the company's future growth, "Kovanov said. It can be assumed that the fund expects to earn capital markets opening and in a year or two, the company will be able to go to a stock market launch with an enterprise valuation of 7 EBITDA, he added. 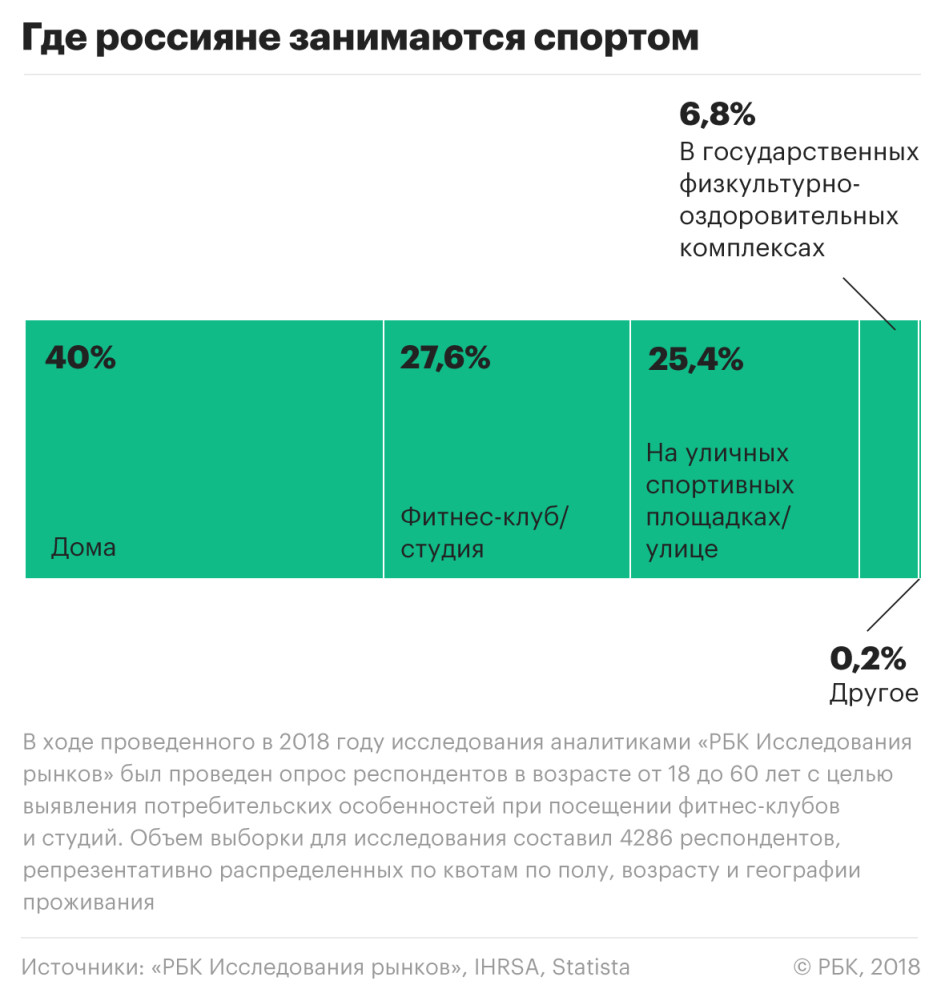 Do not exclude IPO and new investors. As a representative of RDIF noted, "shareholders will jointly consider and choose the most preferred option for attracting liquidity, including the possibility of listing." As director of the Russian training group Nikolai Pryanishnikov said in an interview with RBC, the company is now in "very good economic form". "We are profitable, we provide a good return on invested capital, there is no debt and there are growth prospects," he noted. "An IPO is just an opportunity, but not an end in itself."

What awaits the fitness industry

According to the RBC Market Research forecast, the fitness services market 2018 may exceed 118.9 billion rubles, which is 4.7% more than 2017. Main markets (in monetary terms) – they account for 47% of sales – are still Moscow and Moscow , 12% – St. Petersburg's share, 21% is million plus cities and 20% – in other settlements. Although the Russian market is in the top 10 of the largest, it occupies only 2% in the total volume of the global training industry (according to the International Association of Fitness and Sports estimates, that's over $ 87 billion). 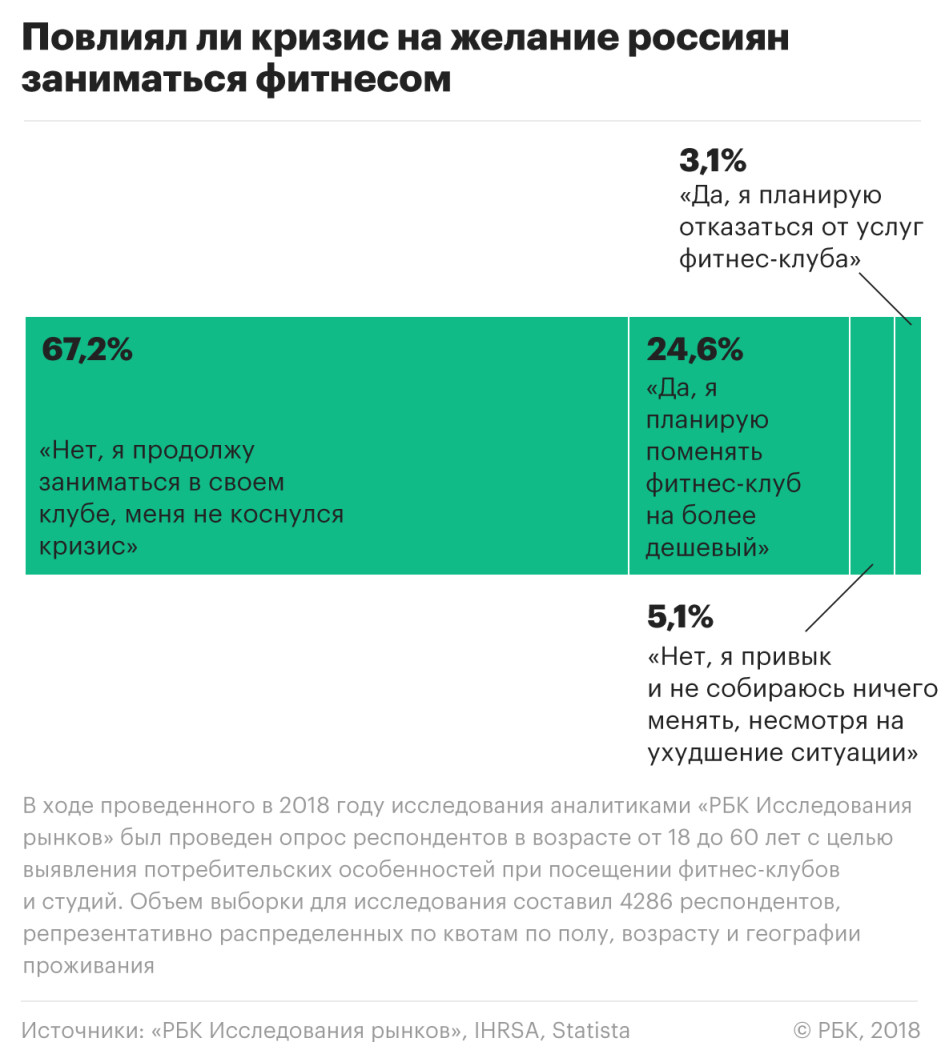 Despite the fact that less than 2.6% of Russians visit fitness clubs and studios, even in times of crisis, the market grows in ruble conditions. The main factor that impedes development, analysts from RBC Market Research calls the crisis and imbalance in the economy. Despite the long-term decline in household income, only 3.1% of respondents were ready to abandon gym club services in 2018, analysts discovered during a survey that, in their opinion, talks about market stability. Among the most important trends that will affect further development, analysts call for consolidation (by 2017, the share of the 12 largest networks was about 25%), digitalization – fitness clubs are increasingly growing with social networking customers, selling subscriptions online, introducing innovative products Access to world markets (for example, World Class with the international hotel chain Rixos, Alex Fitness plans to open 20 clubs in Europe and 50 in the United States) and the development of Eisingen. One of the most promising areas within the segment's development is called the children's fitness: today, most children under the age of 7 do not play sports at all.