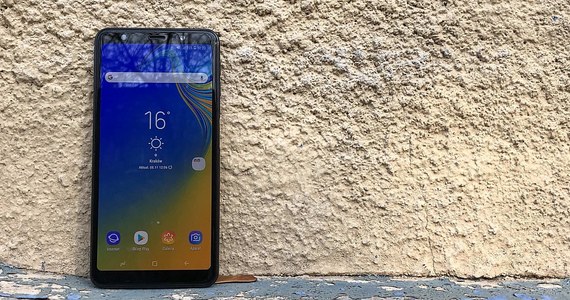 The Samsung Galaxy A7 (2018) is a very interesting smartphone with AMOLED screen, a fingerprint reader placed in an unusual location and a triple main camera. Is it worth being interested in? You will get to know the answer in the following test.

The Samsung Galaxy A7 (2018) was featured at the official conference in Milan, where all attention was focused on another model – Galaxy A9 equipped with a main camera consisting of up to four lenses arranged vertically. The A7 has a smaller, but still makes some of the better pictures in its price segment. It has a very good display, good technical specification and looks like a member of Galaxy S. At the same time, if you are looking for an Android smartphone at a reasonable price, it's definitely worth a look.

The Samsung Galaxy A7 (2018) is a very good smartphone that looks like much more expensive equipment than it really is. He refers subtly to the Galaxy S family, thanks to which he does not lack the elegant character. The smartphone case consists of two 2.5D glass discs and an aluminum frame that attaches them. The whole is compact and solid, and the matching of materials is exemplary. The A7 is quite large – its dimensions are 159.80 to 76.80 to 7.5 mm – but it is quite comfortable in the palm of your hand. You can use the device with one hand (after activating a special mode in the smartphone settings) and the fingerprint reader was placed in an unusual location. We can not find it in the Home button (which we will not experience here), on the back of the case or integrated with the screen. Instead, the scanner is in the button located on the right edge of the device, just below the volume control buttons. Under the free-grip A7, the thumb automatically flies to this location, so the reader's location should be considered very successful. Left-handed people can also use this kind of unlocking of the smartphone, in addition to instead of the thumb having to scan the index finger. The Galaxy A7 is not a rameless smartphone – the display takes about 75 percent. The front surface is surrounded by quite wide frames – especially the bottom can be narrower. The top is still acceptable, as there is a speaker, a front camera lens, an LED light and a proximity and lighting sensor, so we do not experience a note in the A7. This is good information for people who have allergies to retrieve the screen.

As I mentioned, on the right side there are volume control buttons and home button with a built-in fingerprint reader. On the left side, you will only find a slider for cards. At the bottom there was a place for the power port (unfortunately "just" microUSB) and a headphone jack. Only the opening of an extra microphone is placed on the top edge. The smartphone design is well thought out, and it's no problem to use it daily. The screen reader on the right hand side works surprisingly well and at the same time is extremely sensitive – blocks the phone in 9/10 cases without error. In summary – Galaxy A7 is one of the best smartphones in its price range, we will not experience any technical errors or shortcomings.

The Samsung Galaxy A7 is equipped with a Super AMOLED display, which generates high quality images. It has a 6 inch diagonal and works with a built-in 2220 resolution with 1080 pixels. The images are sharp enough and the colors are correct. The maximum brightness is satisfactory, and the display's readability in the intense sun has no problem. The viewing angles also deserve praise. As in all OLED panels, the deep black is also the biggest advantage here. People who do not like the default screen settings can tailor them to their own preferences. Samsung offers four screen modes to choose from: basic, adaptive AMOLED movies and AMOLED images. Onboard you will also find a blue light filter, which will be appreciated by people who use the smartphone intensively in the evenings and at night. You can not forget the Always on display display, which displays time and basic messages on the blank screen. Due to the AMOLED screen, this feature does not consume significant amounts of batteries.

The Samsung Galaxy A7 can be called a smartphone photographically, as it has a triple main camera and a comprehensive application for taking pictures. And, in fact, it is, even if it lacks a certain degree of flagship. Under good lighting conditions, the Galaxy A7 really takes great pictures – perfect for Instagrama, because with a significant magnification, they lose their quality. They also have nice, natural colors and the right contrast. The automatic HDR mode also proves useful. Thanks to the implementation of artificial intelligence, the smartphone adjusts the parameters of the photo to the one selected by the scene. In practice, this feature works very well, but sometimes it can get crazy under intense lighting conditions (it can be repaired with one of the following system updates). Live focus also works well, which causes a blurred effect of the background (even after taking a picture). Night shots look decent, just like the pictures taken with a wide-angle lens. As far as photos taken with the front camera are concerned, they are also at a high level. People who take care of themselves in all possible situations are likely to appreciate the LED light and the entire display. Thanks to this, the quality of selfie even after dark keeps a really decent level.

The new Samsung smartphone is powered by the Exynos 7885 chip, supported by 4GB of RAM. This package is full enough for everyday tasks, as well as playing most titles from Google Play. When using A7, I did not experience unusual performance and interruptions – switching between applications runs smoothly and painlessly. Smartphone does not heat up much, unless during a long session of the game.

As you can see, the Galaxy A7 showed really good compared to the competition, and considering the quality of the pictures offered by his camera – we are dealing with a very good proposal.

The Galaxy A7 is equipped with a 3300 mAh battery, which should be for at least one day with intensive use. Of course there will be people who have to charge their smartphone in the middle of the day and those who will stay up to 2 days away from the power outlet. If necessary – you can always turn on battery power mode. The charger included in the set allows you to fill an empty cell of about 150 minutes and up to 50%. in less than 60 minutes. That's a decent result. 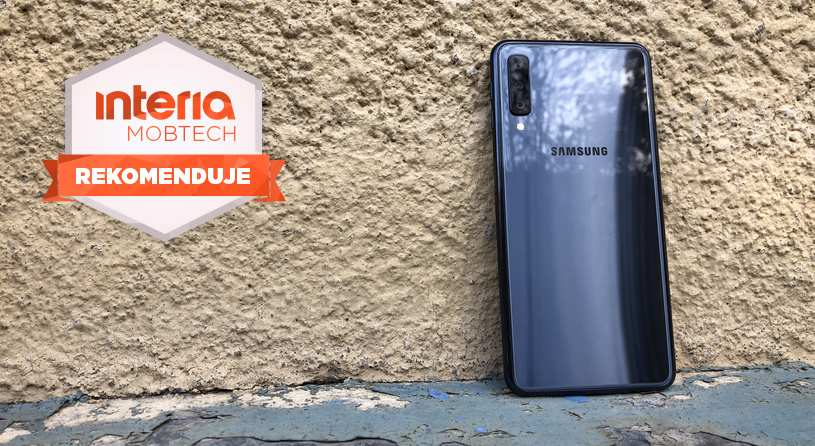 The Samsung Galaxy A7 receives the RECOMMENDATION from the Mobtech Interia service
/INTERIA.PL

The Samsung Galaxy A7 is a "medium sized" smartphone with the best camera available on the Polish market. It is well-made, has a good AMOLED display and also offers a lot of computer power. It is definitely worth being interested in buying it.