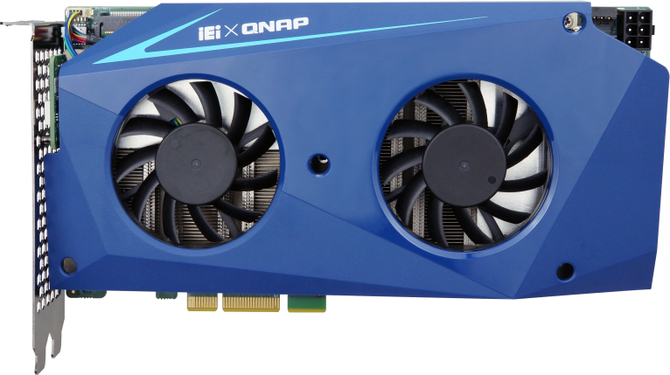 NAS devices are very practical solutions both at home and in the company. Just a few clicks and we have a copy of data, warehouse or work area available wirelessly for all household members or employees. But what happens to the device we currently do not suffice for us? You can replace them for newer, complete your own small SFF set that serves as a server or … buy an expansion card. One of the leaders in the network equipment market in the form of the QNAP company has developed an interesting product. Model Mustang 200 is card-mounted in a PCI Express slot, which has two efficient Intel processors, RAM modules DDR4 and SSD in the M.2 standard.

QNAP Mustang 200 is a supplement for people who attach great importance to surveillance systems, virtualizations and AI support.

QNAP Mustang 200 is a series of expansion cards with dimensions of 40 x 210 x 111 mm and a weight of 700 grams. On the green laminate you will find two low-voltage Intel processors, SO-DIMM RAM DDR4 modules that work with 2133 MHz clocks and NVMe-type M.2 SSDs. The exact specification depends on the purchased variant and looks as follows:

In addition, each model has 8GB of embedded eMMC memory. The whole is cooled by an aluminum heat sink and two 60 mm fan and powered by a standard 6-pin plug and a PCIe 2.0 x4 bus.

QNAP Mustang 200 is compatible with such NAS servers as the 24-inch QNAP TS-2477XU-RP, 16-bit TS-1677XU-RP, TS-1685 and TS-1677X, 12-bit TVS-1282 and TS-1277 or 8 – TVS-882 and TS-877. The extension card is described as the perfect addition for people who attach great importance to surveillance systems, virtualizations or AI support, but they need ready-made solutions. Mustang 200 works under the control of the mQTS system, which is an intuitive solution that can use applications created for standard NAS servers from QNAP. The user has two 10-gigabit network connections available – one per processor. Mustang 200 system will release every moment of the sale. Although the proposed prices have not been submitted, the first overseas stores show that spending is approximately 3999 PLN, 1499 PLN and finally PLN 159999 for the most effective model.