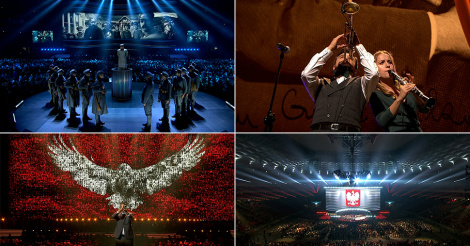 The song of the national anthem of the artists and audience of PGE Narodowy was concluded on Saturday night with the concert for independence. Maryla Rodowicz, Krystyna Prońko, Muniek Staszczyk and Jan Pietrzak appeared on stage. The concert listened to nearly 40,000 people.

The concert opened the celebration of the turn of the century by Poland recycling its independence.

About 30 songs have been made in new arrangements. A total of 30 soloists, six choirs and five bands are performed on stage.

The event was started by Maleo Reggae Rockers. Later Natalia Sikora performed with the song "I saw her eagle in the sky" from Teresa Haremy's repertoire. The singer, like the original version, performed it as a cappella. The work was registered on December 12, 1981, before the war court, and his words became a symbol of hope for those who fought against Communist rule.

During the concert there were legion songs: "White Roses", "Wojenko, Wojenko", "Gray Infantry", "Uhlans came to the window" and "We, the first brigade", which reminded Janosik's little army.

Later sang the Warsaw Sentimental Orchestra "Only in Lviv" and the character of the singer Hanka Ordonówna called Aleksandra Kurzak with the performance "Love will forgive you all". The part devoted to the interwar period ended by Andrzej Lampert, who sang here Mieczysław Fogg "This Last Sunday".

In the dark moments of Polish history from the last century he introduced the crowd gathered in the arena, Mazowsze Folk Song and Dance Ensemble, and Natalia Nykiel and Misia Furtak presented war-time poems. Jan Młynarski and the Warsaw Combo Taneczne moved the people gathered in the arena to the uprising Warsaw, singing songs that heated the capital struggle 74 years ago.

A song to Konstanty Ildefon's Gałczynski words and Tadeusz Sygietyński's "beloved country" music, probably remembered by the older generation of appeals and school academies, presented together by rappers L.U.C., Rebel Babel Ensemble and the Tulia Quartet. The song "White Cross" was performed by Skubas, Jan Radwan and Maciej Starnawski.

The song "Nothing Happens Twice" is sung by Kamil Bednarek, Milo Curtis and Dariusz Malejonek.

Maryla Rodowicz with the accompaniment of the Sound Grace Run performed: "Cheeky", "Do not Worry Me", "Twenty-Years" and "I Tried So Hard".

The times for the PRL were remembered by Sławek Uniatowski, Olga Szomańska, Michał Kowalonek, Mateusz Ziółko, Natalia Szroeder and Kasia Moś. Performed by Krystyna Prońko, together with Sound & Grace, the audience heard the work of Solidarity bard Jacek Kaczmarski "Mury", and Jan Pietrzak reminded his own song – "Let Poland be Poland" and encourage the audience to rise from the arena and perform the song together.

During the concert, the song was also premiere, written especially for the event's needs. Stanisława Celińska performed the song "Prayer for Peace" with accompaniment of the choir "Enchanted Melody" from elementary school No. 5 in Gostyń.

Performances by the artists have made the special effects and stage, animations and movies prepared for the moment more attractive.

After the concert there was a fireworks on the Vistula River.