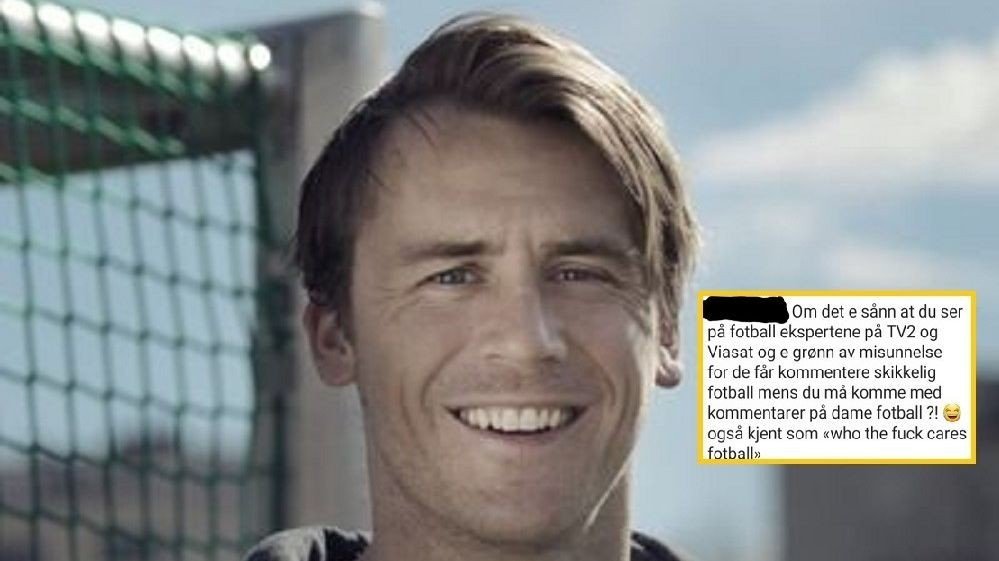 Three teams are fighting for the gold in the Toppserien before it is decided on Sunday.

It was at the end of October that NRK’s ​​football expert Carl-Erik Torp was given an incentive to comment on women’s football. A follower on Instagram made very derogatory comments about women’s football the day after Norway had secured the European Championship place after a victory away against Wales.

Torp himself chose to comment on the message he received on Twitter, where he wrote the following.

– I applaud different interests and opinions, but also want to be one of those who speak when someone expresses this by belittling others. We still have a long way to go. To be able to convey women’s football in Norway is something I am very proud of, wrote the former Brann player.

Dagbladet has previously mentioned the case.

Torp elaborates that he was strongly provoked by the message.

– Opinions about football going to level is a natural part of the discussion and I have no problem with that, but my main point is that we have to put aside that we have to talk down about other things, to point out that something else is better . It must work. I get pissed off annoyed and tired of those who have to come down on something else to present their opinion on something, he says to Nettavisen, before he continues:

– I get opinions I do not have. I think it’s pointless and a fucking thing. We can not talk down in the Top Series because we will talk Elite Series, for example. It’s the same thing in men’s soccer. Why, for example, should one talk about the Premier League at the expense of the Elite Series here at home? We have to build the product. If we only focus on the negative, it will be a sour smear. I can not bear to be part of it, he explains.

Follow the last round of the series with a goal show live on Direktesport.

On Sunday, it is finally clear that the sporty thing must be in focus. The last round of the Toppserien, after the league suffered delays due to corona infection in Arna-Bjørnar, is only a few hours away. You can follow the drama live on Direktesport. Torp will follow the gold drama closely and is committed and excited before the whole thing is decided.

– It’s very close. Before the penultimate round, I thought that Roseborg would not have the opportunity to take it from Vålerenga, but since Vålerenga fooled themselves and were as weak as they were against Lyn, the picture has now changed. They were terribly shaky.

The previous Brann profile is clear that the series’ sprint will offer insane drama.

– It has become as exciting as it can be. Avaldsnes enters a difficult match in Bergen. RBK are going to Klepp, and even if they have been bad, it is not easy, he says.

– We must hope that the others will get a slap

After an involuntarily long break before the last round of the series, Avaldsnes Olaug Tvedten is ready for a decision. The midfielder has contributed a lot to the team actually having the opportunity to take the league gold on Sunday. Up to Vålerenga and Rosenborg it is only one point difference.

She herself has had a very good season in 2020.

– It is a morbidly cool position that everyone wants to be in. The best thing would have been that everything was just on us, but on the other hand, the pressure is from our shoulders. We must hope that the others will slam for us to take the gold, says Tvedten to Nettavisen.

– Do you think it will happen then?

– It will take a while, but the others play against teams that are difficult. It can happen and it can do something with the mental that they know they have everything to lose, she says about the two teams in front of them on the table.

Tvedten explains that she, for her part, had a hope that the team has been able to compete for the top positions before the season.

– Even though many tipped us further down, I had faith in a good season because I know we are a good team. We have shown that we deserve to be up there, she says.

In the national team heat

Tvedten has also personally delivered the goods this year. She has done so well that she was rewarded with a national team place for Norway at the end of October.

– It was incredibly cool. Some of the coolest things that have happened to me. That is the goal that was at the top of the list. I got to play and train with many of those who have been my role models. I hope to experience it again, she says optimistically.

With the European Championship place secure and more young Norwegian players on the way up and forward, the national team can see bright times ahead.

– It’s another two years. They (the management, editor’s note) probably look a little further ahead. I hope I made an impression on the collection that made them focus on me. There are many young people coming and going, there will probably be a small generational change, although there are already many good people still involved.

Tvedten also points out that she appreciates that TV profiles like Torp have the strength to take the fight and stand up to shady attitudes to women’s football.

– There is great respect for it. That’s very nice. We really appreciate it. We want others to believe that this is a good product. We know how much work we put in to be as good as we can be, she concludes.

Electric shock: So much cheaper is fixed price than spot

The online magazine wants an open and lively debate. Here you can easily contribute your opinion.