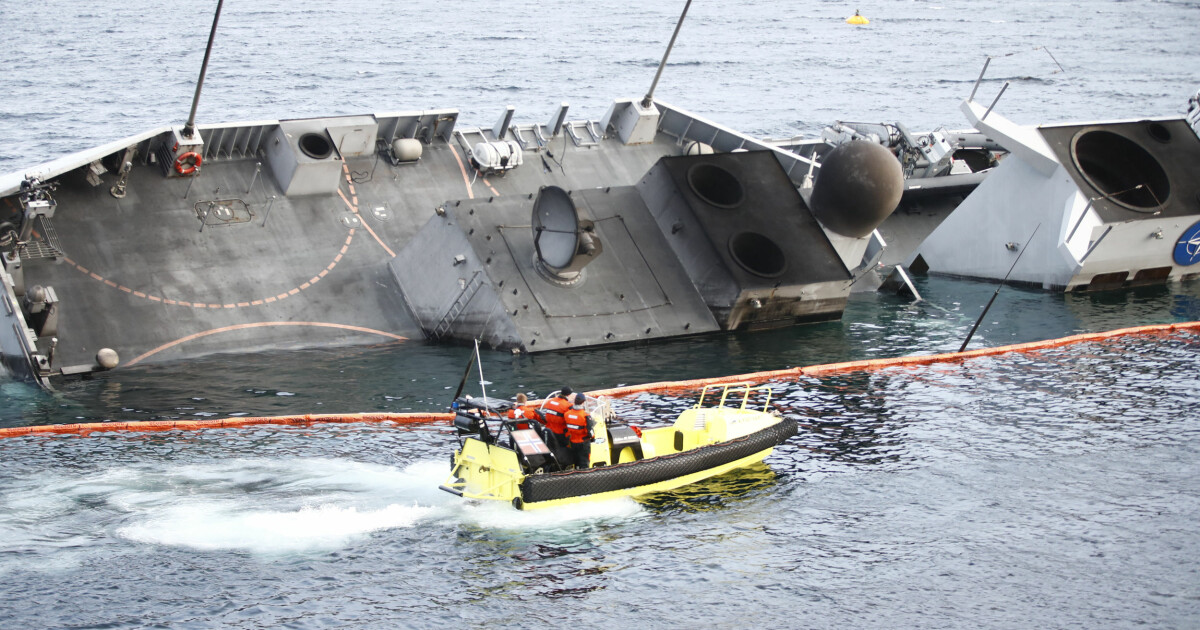 It was Thursday, 04.03, that the frigate KNM "Helge Ingstad" and the oil tanker "Sola TS" collided. The frigate, which had 134 people on board, is now in Hjeltefjorden. With a 500m lane on land and 1000m at the sea, there are few civilians who have been in the immediate vicinity of the ship.

But on Monday afternoon, the defense released the press closer to the frigate frigate.

The Armed Forces transported the press to the ship at 12.45 on Monday afternoon, and at the 13th time the Navy held a press conference near "Helge Ingstad". – "Helge Ingstad" is stable and secured with nine vaiers. We work on the tenth, "says Yngve Skoglund, flagger, to the press. He stresses that the ship has been stable since 18 on Thursday.

"There are still weapons on board frigate," said Håvard Mathisen, Coordinator for Defense Materials.

Much of the ship is underwater, and the defense has no idea how the damage material looks inside the ship.

Asking questions about the defense has had a diver to assess the battle, Mathisen says they have carried out a series of mini-boat operations.

– Both to map the bottom conditions where "Helge Ingstad" is located and around. We have seen pictures of the damage, says Mathisen.

Now they do a dive operation to secure two attachment points in the boat's bow, which is described as a time-consuming operation. KNM "Helge Ingstad" was on his way back to Haakonsvern after participating in the NATO Trident Juncture training. The tanker Sola had just picked up oil loading at Stureterminal Hall in the municipality of Øygarden and was on his way out. The cause of the accident is still unknown.

In the call log that VG has gained access, communication between the tanker, Fedje VTS and KNM "Helge Ingstad" shows that in the minutes before the summary, clear messages were sent to the warship to change course and turn before the collision.

The tanker was not critically injured during the collision and Saturday morning left the area where the collision took place and set the course for Britain. The frigate is attached to land right next to Equinor's oil terminal at Sture. With a total of ten victims, the accident must be sufficiently safe to collect weapons and other equipment.

The defense said on Sunday that it takes time before the warship can be rescued and sent to Haakonsvern for repair.