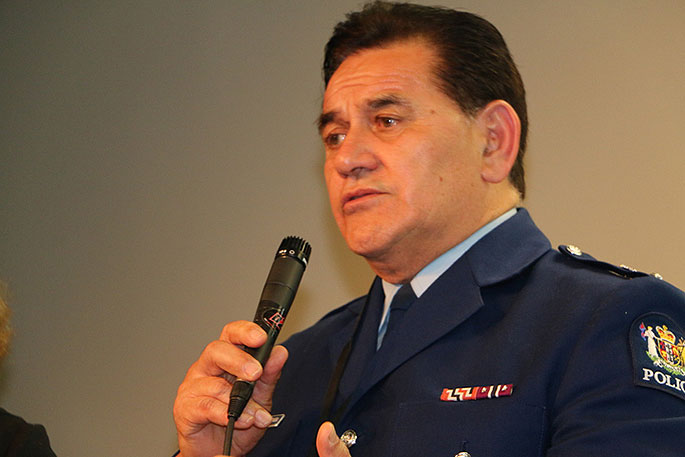 An investigation of the government's appointment of the Deputy Police Commissioner has shown that the process was "adequate and appropriate for purpose".

The report released today also revealed survivor advocate Louise Nicholas, who raised concern in connection with Wally Haumaha's appointment, then met him and was clear that she did not intend to terminate her meeting and that she was open to an employment relationship with him.

Haumaha was appointed May's Chief of Staff in May on recommendations from both Prime Minister Jacinda Ardern and Stuart Nash, Secretary of State.

His upturn to the top rank has been under clouds since Nicholas officially made his reservations about Haumaha's appointment with comments he had made in defense of police accused of rape in 2004.

In the midst of the government's investigation, the police confirmed that they had received a statement about bullying on a joint project with the Ministry of Justice led by Haumaha in 2016.

Mary Scholtens QC, who led the investigation, said that the process was healthy and no relevant information was omitted, as there was no official complaint to Haimaha's behavior as part of the project.

"Without a complaint, there was nothing to take into account," Scholtens wrote.

The Polish Commissioner has welcomed the report in the appointment of Vice-Commissioner Wally Haumaha, saying that it is good to have the investigation completed.

In a statement, Commissioner Mike Bush said that public confidence and self-esteem were extremely important for New Zealand's police.

"It is perfectly appropriate that these cases have been assessed and reviewed by an independent request," he says.

"It's good to finish the survey. I've always said that I welcomed the survey and I looked forward to clarifying issues concerning the appointment of Deputy Commissioner Haumaha.

"I confirm the results of the report that the process that followed to appoint the deputy commissioner was good and that there was no available and relevant information omitted from the process," said the statement.

There was still an independent police conduct. Government inquiry is ongoing in allegations of bullying with Deputy Commissioner Haumaha.

Commissioner Bush said he was limited in what he could say about the Sholtens report, until the second investigation was complete.

Regarding Nicholas' concerns, which she woke up a few weeks after Haumaha's appointment, Scholt's allegations and rumors that Haumaha worked in Rotorua about 30 years ago and his relationship with the police were prosecuted later on for sexual abuse was carefully investigated. 39 ;.

"Innocent concerns and insinuation should not prevent a meeting," she wrote.

An email from Ms Nicholas to police commissioner Mike Bush on June 1, after Haumaha's meeting, was part of the report and elaborated a meeting between the couple together with Vice-Commissioner Mike Clement and Haumaha.

The email from Ms Nicholas said that "the conversation never was about to have any expectations of the NZ police to terminate the deal, but it's about getting the NZ police to notice that I'm worried, I doubt and I wish to This should not be concealed from people who have the power to intervene or protect the most vulnerable. "

Nicholas also said in the e-mail that her intention was to "move on and be open to developing a working relationship" with Haumaha.

Bullying allegations and Nicholas concerns regarding Mr Haumaha were not available to SSC as part of their appointmentt process and Scholtens said they are best described as "unknown unknown".

"I do not know how the process can be improved to ensure that such facts are known," she wrote.

"The appointment process was healthy and robust one, no information was inhibited from the process that should have been taken into account in the process.

"So from a government perspective, we have full confidence in the appointment," he said.

Hr. Hipkins said that SSC could take "some heart" that the process they followed with Haumaha's meeting was the right one.

Despite the discovery, police minister Stuart Nash would not confirm if he had full confidence in Haumaha, while the independent police authority continued his investigation by the Deputy Commissioner.

"I am confident that the process of designating DC Haumaha was done in a manner that was fair and had all the information."

The request hits an early date

The investigation, which was set up to see if the appointment procedure was properly executed, hit a speed shock early when the original investigator Pauline Kingi stood aside after questions were raised by the party's party about whether she had a personal conflict of interest.

Ms Kingi was found to have approved Haumaha's expertise on the Professional Network Platform LinkedIn.

Ms Scholtens took over the role of Ms Kingi and after requesting an extension of five weeks, she left her report this morning.

She said the State Service Committee (SSC) would identify candidates for the deputy commissioner's deputy and carry out the necessary character checks before giving two candidates to Ardern and Nash to choose from.

Miss Scholtens said that all necessary checks were carried out and nothing arose which raised concerns about Haumaha's suitability for the job.

The only exception was the SSC did not identify what Ms. Scholtens describes as "perception risks" which she acknowledges is "only relevant because of the impact of advertising on the appointment".

Scholtens has made recommendations, which she said offered more as "SSC proposal with the aim of increasing the likelihood of identifying these unknown risks".

The recommendations are as follows:

Peters said there was no reason for the claim and refused to call Haumaha.

Mr. Bishop said today's report still does not answer the question of whether Haumaha is the right person for the job.

He criticized Mr Hipkins, Nash and the Prime Minister in order not to say if they still have confidence in the Deputy Police Commissioner.

"This report was only once in the process behind the appointment of Haumaha, as ministers themselves have emphasized on various points.

"The real question is whether it is appropriate. Haumaha continues to be deputy commissioner. Police Minister Stuart Nash has already said that comments from Haumaha were" deeply depressing, "says Bishop.

"For the past 10 years, the New Zealand police have made great strides to repair their reputation in the light of Operation Austin, and the prime minister must respond if she thinks that the appointment of Wally Haumaha will continue to move on.

"The front line and even higher police officers have expressed concern that the general trust in the police will be endorsed by the appointment," he says.

The National Party continues to urge Haumaha to resign or resign.

Prime Minister Jacinda Ardern said the report shows that the government can have confidence in the process followed but she would not say if she supported Mr Haumaha while the IPCA investigation was still ongoing.

Bishop had previously questioned NZ's first deputy leader Fletcher Tabuteau's family connections with Haumaha and if internal ministers Tracey Martin, an NZ's first parliamentary member, should have been responsible for the investigation of the nomination process.