YOUR SAYS | Emergency stop – PM must pay the ultimate price 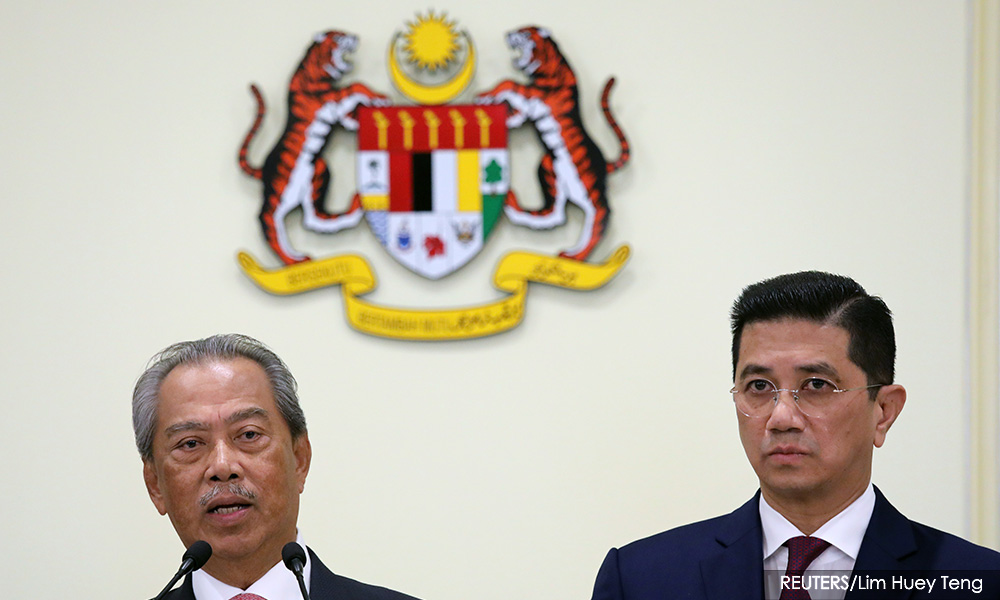 YOU SAY | ‘If he comes away unscathed, the excitement we experienced over the weekend will only begin …’

We discuss – Hishammuddin whether PM should end

MISS: The silver lining in this ridiculous and absolutely unnecessary “emergency” is how the spotlight has been on the trio – Prime Minister Muhyiddin Yassin, Interior Minister Hamzah Zainudin and Senior Minister (Economy) Azmin Ali.

To some extent also the royalty’s vitality to act as a “control and balance” to prevent overload of unscrupulous politicians.

The question now is whether the wasteful three will escape without a shot and may carry out more evil another day.

The royals would now be clearly aware of the real and current risk of ambitious politicians using race, religion, the federal constitution and the royal institution itself to play the system of government that this country has maintained intact for the past 63 years.

If the three and their enablers (seen and invisible) escape unscathed, there is a very real possibility that the apparent tension we experienced over the weekend is just a preview of what can be unleashed – Covid or no Covid.

The only way to prevent such crises from being constructed again is by making them pay the ultimate political price – sent to the pages of public life, from which they can only see helplessly … and repent, if not, repent.

YellowKancil0051: Of course, Muhyiddin must resign. He does not have the confidence of the monarchs now. His entire government will be supported by the destructive planning of his political operators such as Hamzah and Azmin.

The country has gone from disaster to disaster because of their political wings, not to mention an inflated cabinet with 70 ministers and their deputies.

The latest gambit must be the last straw, as it is unthinkable that Muhyiddin will order the majority support of Parliament after proposing to suspend it by adopting emergency forces.

The country simply cannot afford such a government during this time of crisis. The Sheraton movement in retrospect is the act of selfish and irresponsible politicians. The country is run only decently because of the heroic efforts of dedicated public officials while their political leaders are preoccupied with politicians.

We must shut down politicians like Azmin and Hamzah until we can get rid of them for good in the next general election.

Cyclone: Muhyiddin is not my favorite prime minister, but if he resigns then who else? There will be another political instability as individuals, party factions and political parties climb for power and position.

We need stability for economic recovery. Changes at the top mean a domino effect on other key positions and changes in the policy. In the Covid-19 battle, the key figure is the Director General of the Ministry of Health Dr Noor Hisham Abdullah and his team; forget the politicians.

BusinessFirst: This is classic overreach and hubris from Bersatus’ management and Azmin’s team. It was not enough to be prime minister and take over the federal government. From the beginning, they played politics and pressed the envelope. They did not stop while they were before.

First, they undermined their state governments Johor and Perak. Not happy with that, they also took over Malacca. Then they fired their own founder, Dr. Mahathir Mohamad, and his followers.

You would have thought they would be happy, but no. Then they went to Kedah. Were they happy? No. Then they changed the speaker for Dewan Rakyat.

After consolidating power, did they stop saying “Let’s stop politics and start ruling”? No, they decided to use the law to accuse DAP leader Lim Guan Eng, pressure the opposition and take up the case of opposition leader Anwar Ibrahim again.

If that was not enough, they then reached across the South China Sea and constructed the abundance of more than two dozen state congregations in Sabah – leading to an election.

Now it is obvious that there is a desire for power for the sake of power. But while their “gamble” seems to have paid off, it is only in the short term. Now the chickens have returned.

Promises were made to the Sabahans. “Abah is with you”, support “Abah”. Federal and state should be together. No PAS in Sabah because their policy is not appropriate. What did they do then? Submit “independent” to compete against Umno. Cheating Umno from the post of Prime Minister.

As if that wasn’t bad enough, they caused the Covid-19 explosion in Sabah and spread it to the peninsula. Has Muhyiddin since bothered to visit Sabah? Since then, has there been concrete help for Sabahans? Unfortunately not.

Has there been a large number of doctors and personal protective equipment (PPE) to Sabah? Has extra money been given to the Sabah government which is now “adapted” to the federal government? No and no.

It seems that the Sabahans have been left alone to fend for themselves. Played out with false promises, again. And yes, before I forget, PAS also entered the Sabah State Assembly as a reward for their loyalty to Muhyiddin.

It does not matter that the case of the “hero” from Turkey was granted “no further action” despite public outcry and that the MP for “distorted Bible” fame has still not been punished. Instead, they spend on RM6,000 lunches and luxury cars, state-owned enterprises (GLC) and ministerial posts. Public opinion and disgust are ignored.

Is it not obvious that you pushed to the breaking point? If you had quit before Sabah, there would have been no Covid Crisis Explosion Part 3. You would not have spent any political capital you had left “bullying” Umno for the CM post in Sabah. It would not have been necessary to even consider an emergency to strengthen your position.

In the end, this is a classic overreach. It is clear that this government is ready. It’s not about, but when it collapses. It will happen while the horse trade is ending. Who will show up? Anwar? Tengku Razaleigh Hamzah? Shafie Apdal? To be fair, any of these three are better than what we have now.

Bobby0: Umno is as guilty as Muhyiddin when its parliamentarians, at a government meeting, supported him in asking for emergency services from Agong.

Why were they silent right now? Why did they not oppose such a move? Why does Umno not address its equally guilty MPs?

So stop this way to blame Muhyiddin alone. The whole cabinet, including these MIC, MCA, PBS, GPS and everyone else, is guilty of these betrayals of the people. They should leave with Muhyiddin.

The above is a selection of comments from Malaysiakini subscribers. Only paying subscribers can post comments. Over the past year, Malaysians have posted over 100,000 comments. Join Malaysiakini community and help set up the news agenda. Subscribe now.

These comments are compiled to reflect the views of Malaysiakini subscribers in matters of general interest. Malaysiakini does not intend to represent these views as facts.

Olivier Giroud scores again when Chelsea strike back to be top

BABYBAY: “We’ll get a CS coach and be the best team in the game”

Penang CM thanks for directional locking in two areas

Watch: Super Junior threatens to take over “Ask us about something” in next week’s preview