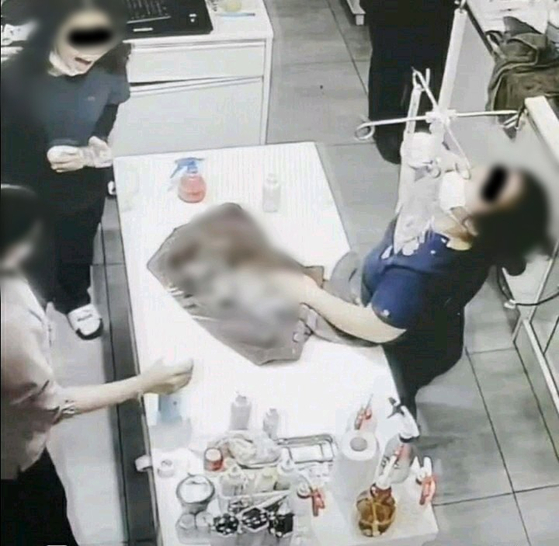 At an animal hospital, controversy arises when medical staff spray the toilet Febreze on dogs after surgery has been revealed. The veterinary hospital sent an apology, but the death of a dog that has recovered from the operation is spreading controversy over abuse. The sixth at the Blue House National Petition called on a 75,000-strong notice board to punish medical staff in this case.

Around 5:33 p.m. on the 1st, an employee of a veterinary hospital in Gwangju Metropolitan City laughed after spraying Febreze on the body of a dog who had undergone tooth extraction. [독자 제공]

In a closed circuit (CCTV) video released by dog ​​owner A, an employee who sprayed toilet deodorant on the dog’s body after undergoing incubation extraction at 5:30 pm on 1 at an animal hospital in OO Metropolitan City Contains this. While spraying a deodorant, he takes a moisturizer from a famous cosmetic product from his bag and sprays it, and the other employee laughs at it. The puppy died three hours after tooth extraction.

Part of a CCTV video posted on his Instagram by Gyeonju about his dog ‘Sam Soon’ on the 5th. [인스타그램 캡쳐]

The fourth A published a post on his social network service account (SNS) that said ‘Remember’ the puppy. Mr A said: “When I tried to say goodbye that night (when it was surgery) the baby was also beauty and the smell was so strong that my head hurt, so I was full of doubt.” “How can a person who manages life by watching CCTV do it? I thought. “Mr. A plans to sue the hospital for violating the Animal Welfare Act.

A national petition was also published on the Blue House bulletin board. In the petition, Mr. argued. A titled “Please Strict Punishment at OO Metropolitan Animal Hospital” and said “I hate nurses, doctors and directors who work to kill even though veterinary hospitals are a place to treat children with wounds. He said, ‘I hope you will prevent such an incident from recurring. ”

Hospital “Use of the product to remove inflammatory odor”

As the controversy grew, the veterinary hospital published an apology at Navers Café ‘Kang Samo’ on the 5th. The hospital said, “While the anesthesia is recovering, the teacher combed the child to take care of the child more, but there was no intention to abuse. very sad and sincerely reflects on the use of inappropriate products to remove the child’s inflammatory odor. ” He explained.

An apology from the animal hospital on the 5th at Navers café ‘Kang Samo’. [네이버 카페 캡쳐]

“The cause of the death of the animals must be clarified”

Mr A wants to be punished by veterinary hospital officials. In response, attorney Park Joo-yeon (co-representative of Animal Rights Research Group PNR) said, “It is inappropriate for veterinary medicine to spray deodorant after anesthesia.” The Animal Welfare Act must have a causal relationship to determine whether spraying odor affected the death of the animals. It will be possible to apply, ”he explained. He added: “It can be said that it can be said to be intentional, but only if the causal relationship is proved in civil terms is it possible to claim damages.”

Hee-kyung Cho, head of the Animal Freedom Association, said: “You need to clarify what the hospital did at the time of the incident so that you can find out the cause of the animal’s death.” . Meanwhile, if an animal is abused and killed in violation of Article 8 of the Animal Welfare Act (prohibition of cruelty to animals, etc.), imprisonment for up to three years or a fine of up to 30 million won.