Brazil, Tite defends Paquetà: "He is a fantastic player" | News

Following the attack by Rivaldo against Lucas Paquetà, not worthy of the former Golden Ball to wear Brazil's number 10 jersey, in defense of the Milan midfielder, coach Tite took to the field: "We must be patient with Paquetà, after missing the first step of the match he lost confidence. " The coach believes in him instead: "He is a fantastic player and will show that he is growing in Milan. It will calm down, let's give him the right time".


Rivaldo, via Instagram, expressed sadness about seeing the beautiful number 10 in Brazil worn by Paquetà. An attack not so much on the football player as on the technical commissioner who responded quickly. 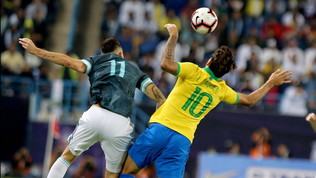