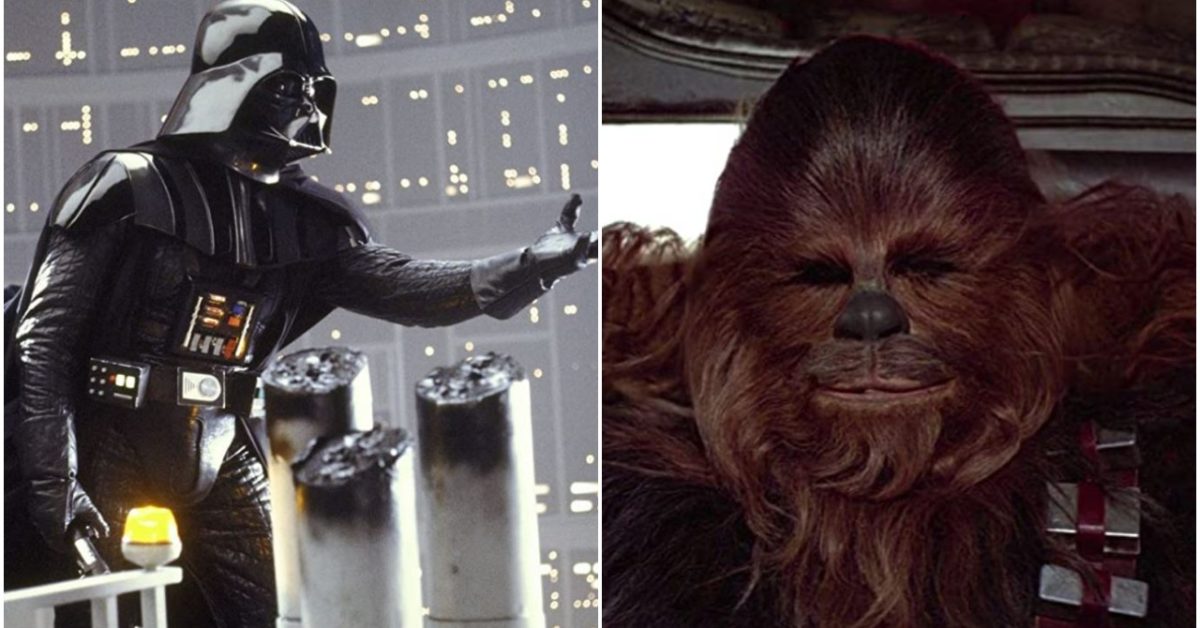 David Prowse and Peter Mayhew were two bigger than life figures not only because of their height, but rather they did so much together on screen for Star Wars franchise without saying a word. Sebastian Shaw performed a few lines as a dying Darth Vader in The return of the Jedi (1983) neither Prowse nor Mayhew said anything on their screen time because they were in masks all the time. Prowse became the body of Vader during the original trilogy, and Mayhew was the physical presence behind Chewbacca in seven of the nine episodic films. While Chewbacca was created via synthesizer mixed with a dog and Father’s voice dubbed in post-production of James Earl Jones, Mayhew and Prowse provided some of the most memorable and powerful scenes in franchise history.

With Prowse’s passing away on November 28 and Mayhews in April 2019, let’s look back at their contributions and why they are just as important a presence along with their more famous co-stars. Looking beyond the cheesy MTV Movie Awards Live Time Achievement Award and Star Wars Holiday Special, Chewbacca became one of the most enduring and delightful characters in the canon. Most associated with the captain of the Millennium Falcon in Han Solo, mostly played by Harrison Ford in the movies and Old Honor in Solo (2018) offered the proud Wookie so much personality in addition to his growls with Mayhew’s body language. I would even argue that Ford would not be the actor he became, and He would not be the charismatic villain without Chewy to complete him.

Whether it acts as Han’s muscle or tries to tolerate C-3PO’s (Anthony Daniels) over-the-top whining, Chewbacca was such a complete character in every way. He can pull off scary, scared, annoyed and remained loved at the same time, and he probably gave the best hugs. The only time personally it felt awkward for me when he was without his best friend. Yes, I’m talking to you, Revenge of the Sith (2005) and sequels after The power wakes up (2015). He just felt forgotten and lost in the mix. For me, the Prowse era Darth Vader represented the best times in the character. I understand that we are three generations of the movies, but the one that stuck with me the most was the original trilogy. Obviously given the character’s fate in ROTJ, it would be difficult to justify his return but thank the force, Lucasfilm showed restraint given what happened to the emperor. The other times we saw was the injured “Noooo” at the end of STONE and Rogue One (2016), which I can take or leave it.

Most fans loved him cleaning the house for rebel foam to get bookends A new hope (1977) at the end of RO, but for me the scene was just a by-product of its time. When he was growing up, Darth Vader never had to show his brutal strength to prove a point. Prowse made it perfect for me with its bulky figure and subtle hand gestures. He was incarnate power, not because he could cut you down with a lightsaber. It’s too easy. He kills you with a glance or with a simple click of his hand, suffocating you as long as he can see you with his Force-choke. It is kept mysteriously conscious, not knowing what he could do if he tried.

When the prequels came out, that subtlety went out the window and the video game mechanics took over. They removed the mystique of Vader because everything about the force was micromanaged and gave up. Now you have a fan edit of his fight with Obi-Wan Kenobi from BROTHER, and you have these grotesque exaggerated displays of power that did not have to remind you how bad Vader is. Look at how he is not only portrayed in BROTHER but its immediate sequel The empire strikes back (1980) and ROTJ. Compare them with others Star Wars villains and tell me who people are still talking about after all these years and why Vader remains the top of the predator on the dark side.

I have been a supporter of pop culture from games, series, sci-fi, fantasy, film and television for over 30 years. I grew up reading magazines like Starlog, Mad and Fangora. As a professional writer for over 10 years, Star Wars was the first sci-fi series I fell in love with. I’m a nerd of all business.