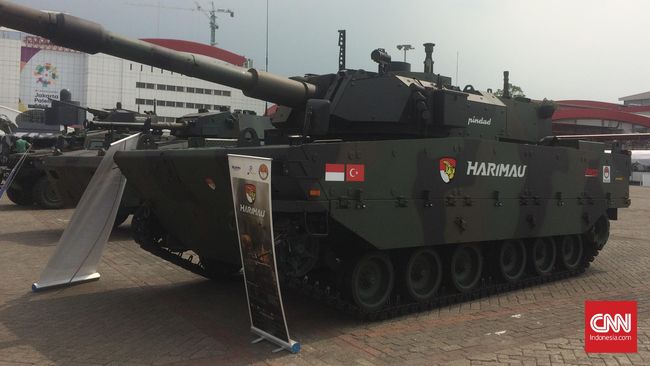 RI's Defense Minister Ryamizard Ryacudu said that the existence of thoughts with this type of medium could mean that TNI no longer needs to buy German-produced leopard tanks to face the defense system.

"Yes [enggak akan dibeli lagi]if a heavy tank is useless it's better [Tank Leopard] "It was issued during the TNI anniversary," said Ryamizard at JIExpo on Wednesday (11/7).

In addition, the former Armist boss also considered average tanks as the tigers more suited to work under the geographical conditions in Indonesia and the countries of Southeast Asia, which have varied land contours.

"We really fit the average tank if the heavy leopard is not appropriate. We want to go where? The road can collapse if you use Leopard because it can weigh 60 tons. Especially if you already leave Java, Sumatra and Kalimantan as [daerahnya] swamp. Not right, "said the retired general of the four-star army.

In the same place, the director of PT Pindad, Abraham Mose, said that cooperation between his party and FNSS to develop tigers was conducted since 2015.

"At present, the process has been completed, development, investment value of Rp150 billion from Turkey and Rp150 billion from Indonesia. So Rp300 billion" said Mose when he met in the Indo Defense 2018 event, Jakarta, Wednesday (7/11).

The tank weighs about 30 tons, for that reason, Mose also agrees that tigers are more suitable for the conditions in Indonesia. In addition to relatively loose soil conditions, the bog stated that roads in Indonesia, including bridges, relatively have a support capacity of no more than 40 tons.

"We already have [tank] Leopard weighs almost 60 tons, and does not really match the conditions in Indonesia, which has loads of loose ground and many bridges. So how do we have the idea of ​​building less thoughts, but the quality is better, says Mose.

In the case of ballistic protection, this tank is indicated on STNAG 4569 Level 4 level and anti-mitigation at STNAG 4569 4a and 3b levels.

This idea does not stop there, it also has a 105 mm caliber tower's main weapon with an automatic cooling system.

"Usually, these types of thoughts fill the ball manually, but this is automatic, so it's convenient for the rider," said Mose.

As the name suggests, "Harimau", Mose said that this tank has agility management and better resistance than leopard tanks.

He also said that the "tigers" had passed various attempts by the Ministry of Defense and the Turkish government since last year.

He claimed that this tank had received a proper certificate from the Indonesian army and the Department of Defense.

"The crucifixion test has been 2500 km, explosion tests with 80 kilos of TNI blown up and it turns out it's still intact, why is there a gun test with static and dynamic targets and everything works well," says Mose.

Mose said that his party had prepared a mass production of 25 units Tiger Tanks next year for TNI's needs.

At world level, Mose stated that this tank had attracted interest in neighboring countries like Malaysia and Fipilina who planned to buy it. Mose said Tiger Tank followed the auction auction in the two countries.

"So they are proud of their interest in the recently completed average tank," he said

On the one hand, Ryamizard said that the Indo Defense Expo and Forum activities could continue to support efforts to realize the independence of Indonesia's defense equipment industry.

Ryamizard said the government was trying to release dependence on procurement of defense equipment and technology from foreign manufacturers.

One of them was ambitious for Indonesia to first master and produce its own a wealth of advanced defense equipment owned by foreign countries.

He describes, for example, several TNI reinforcements that are currently needed to be renewed. He also felt that he really needed the best technology and defense equipment to maintain internal security.

"Not for war, to maintain peace. Indonesia loves peace. It must be guarded," he said.

Ryamizard also said that Indonesia was a potential producer and the most attractive market for the defense industry in Southeast Asia.

Indo Defense 2018 was held at JIExpo from 7 to 10 November 2018. The event that had entered its eighth year was attended by 867 participants from 60 countries, of which 30 countries were present as state pavilions including Indonesia.