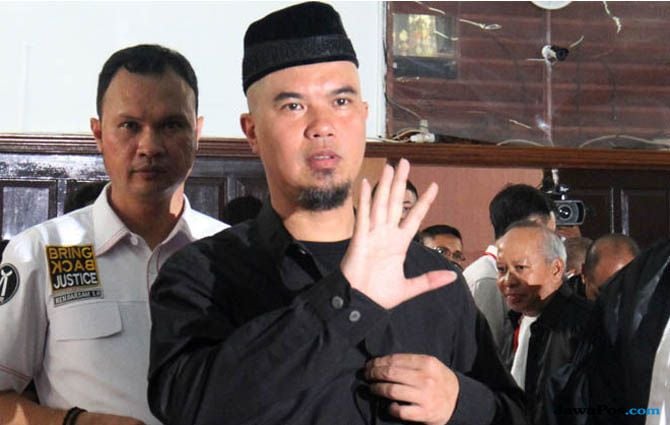 FAJAR.CO.ID, JAKARTA – The trial of a case of alleged hate speech with defendant Ahmad Dhani was held again in South Jakarta District Court (PN), Monday (5/11). After hearing the respondents there seems to be no difficult question for Ahmad Dhani.

Several times, the prosecutor (JPU) searched Dhani for mobile phones used to write down the words that were charged. Then the frontman of the Dewa 19 band was questioned about the social media he used.

In the trial, Dhani claimed to have an admin for social media, namely Bimo. But, according to him, Bimo is one of the administrators of every social media artist in Dhani to be active, as well as Dhani social media.

Then, at the end of the investigation, Dhani requested the prosecutor to make his claims no higher than the ex-governor of DKI Jakarta, Basuki Tjahaja Purnama alias Ahok. Therefore, he claimed that what was done was not as bad as Ahok did. So inviting many times to flock to Jakarta to protest.

"I appealed to the prosecutor so the demands were no more than Ahok," Dhani asked in court.

Hörande Dhani's request, one of the members had a smile. No one answered, however.

Furthermore, in the presence of a judge, Dhani promised that his speech was intended for all and not limited to certain groups, religions, tribes or races. Therefore Dhani still believes that what he did was not wrong.

"I changed before the judge and the prosecutor (who prayed) that what I wrote was for everyone. In fact, there is no need to swear, even in the editors, who are followers of religion. Someone, someone, any religion. I was asked for a trial, a bastard, actually wrong. It should be a criminal, not a bastard. I want to write the hanging team, I'm afraid of being punished. (Saying) Spending it's the right words, "said Dhani to the media crew after trial.

It is known, Ahmad Dhani threatened 6 years in prison. As accused by the Prosecutor (JPU), Article 28 (2) was violated. Article 45 (2) of the Republic of Indonesia Act No. 19 of 2016 on Information and Electronic Transactions or ITE. In addition, Ahmad Dhani faces a fine of Rp 1 billion.

Ahmad Dhani was accused of saying hatred through his Twitter account on March 6, 2017, at 2:59 pm. WIB said that "someone who supports religious opponents is a bastard that has to be spotted in the face.

Meanwhile, Ahok is known to have been sentenced to two prisons for being proven to have damaged religion. The sentence is higher than the prosecutor's claim, which is a year with two years of trial. (agi / JPC)