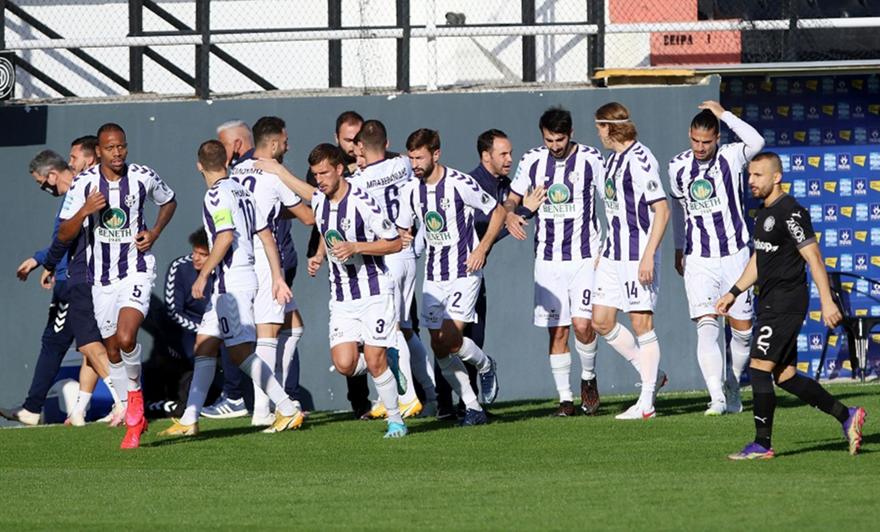 The light brigade was cynical, took advantage of the opportunities it was given and at the same time stood against OFI’s pressure, passed through Heraklion with a score of 2-0 for its first away win this year and remains undefeated for the fourth match in a row!

Third goal by Fation (3 ‘) this season, a virgin goal with a very nice shot by Daoudas (71’). Deadly for the hosts Grivas who during the first half lost two great opportunities to equalize, worries for Sakor who left with an injury problem!

Apollon Smyrni’s first victory against OFI in Crete for the first division after 21 years and especially after March 1999.

Apollon Smyrnis, who over time seems to get better and better and that he has the quality to be saved and perhaps relatively easily, is still at 9 OFI!

OFI plays at home with Larissa next Saturday, Apollon welcomes AEK on Sunday (13/12) in Rizoupoli!

That’s how they started

Giorgos Simos led OFI 4-2-3-1. Sotiriou under the beams, with Wes, Diamantis, Giannouli, Korovesi in the defense quartet. Sakor and Neira on the shoulder, with Stargeon, Balogianni and Sardinero as midfield triplet behind the only forward-looking Grivas.

With the classic 3-4-3 from the other side, George Paraschos defeated Apollon Smyrnis. Verhulst in defense of the home, with Dominguez, Lisgara and Brusic in a trio of stoppers. Baxevanidis right posterior half, Houhoumi’s left and Fation, Slivka on the shoulder. At one end of the attack Bentinelli, at the other Tsiloulis and at the top Ioannidis.

An absolute surprise for OFI, who before it even understood what was happening saw the guests … strike! It was the third minute when Bedinelli took the first corner, Tsiloulis got the first head and Fation, who came as … a trailer and was lost by the Stargeon mark, pushed the ball into the net to 1-0. This goal did not lose OFI psychologically, which took the losers in the match and until the fourth round it pushed the guests, which created some finals that had not wanted an end. On the other hand, Apollo’s play was disheartening.

I did it twice but Bedinelli and Houhoumis had no good final choice, wasting the conditions that existed with OFI who made a big phase in the 27th minute but Grivas did not manage to beat Verhulst from five meters! Ten minutes later, the same player saw that the ball was perfectly placed in the area, but his place was tragic and went over the crossbar. Phase that was the last of the half, as the guests managed to control the match afterwards and keep their lead until Sidiropoulos double pipe.

OFI started the match in the second half with a phase, but Verhulst did another good operation on Sardinero’s head, with the main characters the same in the 50th minute and the result again … the same. The two coaches made their changes, Simos saw OFI injured and could not continue and Parashos updated his team in attack. In the 68th minute OFI came close to the goal but Verhulst came out victorious again in the shot on Balogiannis and two minutes later the visitors struck again. It was the 70th minute when Daouda stole the ball, Cole gave it to him again and the Nigerian forward with a fine individual effort and a perfect finish, left no room for reaction against Sotiriou, made it 2-0 and tilted the scales in favor of Apollon Smyrnis !

The light brigade reacted after … shocking 3-3 with Volos, showed quality and showed once again that it is unfair by its position in the table. He kept his opponents comfortable for the last twenty minutes away from the Verhulst area, which was excellent again and when needed he was there and Sidiropoulos’ last whistle found that Apollo kept a clean sheet for the third time this year (ss. With AEL and Asteras Tripolis), for to get their first away win and remain undefeated for the fourth game in a row!

IN QUESTION: All reports on the official SPOR FM channel on youtube

Wild bees: Asimina gives in to the Babi charm – What we will see next week | ZOE