Images: "Saffron" and "Ghadhban" open the security forum in the field back in Port Said 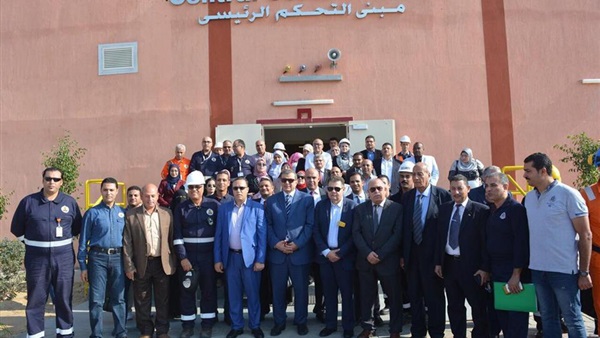 Minister of Labor Mohammed Saafan and Port Said Governor General Adel Al-Ghadhban were opened on Sunday the occupational safety and health engine in the Bahar field of the Bilaim Petroleum Company. produce The gas area, as well as the volume of investment, amounting to $ 6 billion in the project, currently employs 492 workers, technicians and engineers, and reviewed some data on the depth of water and the number Wells, And production lines.

The minister inspected the Dhahr field, inside buses equipped with protective equipment, listened to a detailed explanation from engineer Samir Zayed, the company's deputy chief. He inspected the control unit and praised the employees and their commitment to occupational safety and health practice at the workplace.

At the beginning of his speech at the opening of the forum, the Minister of Labor sent a letter of thanks to the Armed Forces and the Egyptian Police Children to bear the Agency for the greatest protection and the difficulties they face in black terrorism. He also commended the Egyptian citizen who treated President Abdel Fattah al-Sisi in his war on terrorism, the difficult stage that Egypt is going through, especially in economic terms.

Mr Saifan expressed his great happiness in the presence of the oil sector workers who are very loyal and loyal at work and emphasize that loyalty at work is the result of God's almighty and that the message of the discovery of a field in 2015 is a gift from God to the Egyptian people.

He added that the time between discovery and production start is a short time, indicating workers' appreciation of Egypt's position and made great efforts and sacrifices to reduce the time period and contribute to the addition of the Egyptian economy to to This term must prevail among workers in all industrial sectors And productivity In Egypt, so that the country can achieve a better position at all levels.

In terms of safety and health at the workplace, Saifan emphasized that it is one of the most important tasks in the ministry aimed at altering stereotypes embedded in people's minds about occupational health and safety and making them behaviors and cultures spreading in daily transactions. He pointed out that the Ministry, in cooperation with the Ministry of Education, Education for Children, is to grow up and aware of this culture, which ultimately creates a society with a safe environment. Statistics show that negligence in the application of occupational safety and health requirements and guidance causes major losses to the state, employers and citizens. At this stage, it is necessary to work to maximize the importance of occupational health and safety through these forums, which spread this culture between companies and workers.

Port Said Governor expressed his pride in being the governor of the brave city whose sons have been in good places during history and that this city has witnessed and remains a giant project in its country, especially recently where these projects contributed to a major conversion in the Egyptian economy. Hub port connects all continents. "

He called the "Ghadhban" people in his province to be proud to achieve Port Said's self-sufficiency of gas throughout Egypt.

He added Egypt during this period to bring investments and adopt factories and advance for the economic renaissance, and urges young people to ignore rumors and fake ideas that kill the future dream.