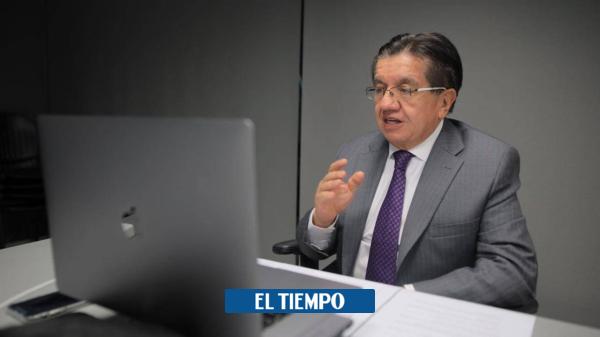 “We expect to use the first vaccine during the first semester of 2021”, Health Minister Fernando Ruiz said on Wednesday, given the latest announcements of at least three vaccine projects that have yielded promising efficacy results against covid-19.

Ruiz pointed out that the three-month vaccination plans consider that the vaccines would initially cover health workers (800,000 people), older than 60 years (6.8 million people) and population with comorbidities such as high blood pressure, diabetes, heart disease and kidney failure (6.4 million people).

The first vaccines to be applied would be those obtained through direct negotiations with pharmaceutical companies, which would be about five million doses.
The remaining 10 million would be covered by the COVAX mechanism, of which Colombia is a part, and would arrive in the second half of 2021.

Ruiz made it clear the rest of the population and those groups who are less likely to have covid-19 mortality may have access to the 2022 vaccine. “We are trying to reduce mortality and in the way that vaccines will be available, we must necessarily cover risk groups first,” says Ruiz.

The second phase of the program aims to create herd immunity by vaccinating between 50 and 60 percent of the rest of the population.

“When a person is vaccinated, they not only protect themselves, but also protect others and cut the transmission chain, and this group immunity would occur when about 60% of the population is immunizedHe claimed.

Ruiz reiterated that the vaccine will be free of charge for the entire population and will be distributed through public and private health services. notes that “the vaccination program in the country is linked to the fundamental right to health and the state’s public health function.”

Faced with proposals to remove the highest social strata for the vaccine, Minister Ruiz rejected the initiative, stating that it is not possible to discriminate against people based on their socio-economic status.

(You may be interested in: Warning for lack of sedatives and painkillers in the country)

In this regard, he indicated that minors or older adults living in strata 5 or 6 can not be discriminated against. “A discrimination process would be even more expensive, more cumbersome and severely restrict access to vaccination.” Sa Ruiz.

In view of the resources available for vaccination for covid-19, the Minister said that To date, there is enough budget to vaccinate 15 million people. “Currently, we are moving forward in bilateral negotiations with various pharmaceutical companies, we hope to receive some news in recent days,” he revealed.

During the negotiation process, Colombia adopted as a general policy not to make purchases blind, but only when there is scientific information on safety and efficiency.

“Once this information is available, we will begin the vaccination process, but apparently we have previously signed a confidentiality agreement with Pfizer and other companies,” the minister said, adding that vaccines would be purchased from various laboratories, as long as there is availability.

(Looks: Confirmed and suspected deaths from covid-19 total more than 41,000)

In this way, Ruiz claimed that there are confidentiality agreements with, among others, Chinese and Indian vaccines. “What we are waiting for, as in any case, is the evidence. That is why it is so important for a country not to buy blindly but with scientific information and hopefully be published about the effect of the vaccines “, he concluded.

“As a responsible country, we will acquire those licensed by the Food and Drug Administration, the FDA (for its acronym in English) and the European Medicines Agency, and here INVIMA will do its own process,” he said.

The head of the Health portfolio pointed out that Colombia is currently negotiating confidentiality agreements with: Pfizer, AstraZeneca, Janssen, Sinopharm, CanSino and Serum Institute of India, because the country is open to acquiring various vaccines as long as they meet the safety standards of humans and the effect against the virus.