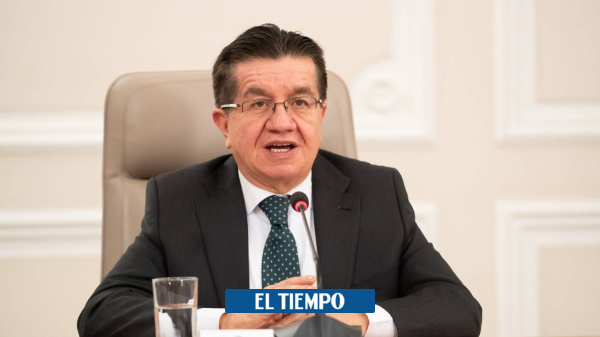 
Health Minister Fernando Ruiz repeated this Thursday that there is an “impossibility” to comply with the guardianship decision that orders to request PCR tests from international travelers entering the country and in that sense stated that “What will continue now will be the submission of the challenge from the decision and the process will continue.”

Ruiz indicated to follow the decision “it is not viable because it has economic and health effects, mainly “.

He also referred to the contempt incident he could face for not following the appeal. “Contempt is an obvious attitude of bad will, negligence, trying to obstruct or conscientiously deceive justice and this is not our situation. Ours is the impossibility of the health and defense of public health in this country to be able to apply a decision that generates an extreme situation before public health policy, he said.

Ruiz claimed that Colombia has been under strong conditions for ten months to curb the pandemic. “A measure of quarantine for 120,000 people who travel every month has effects on mental health and public peaceto. We Colombians have a certain exhaustion in this regard, he said.

(Also read: Can the Ministry of Health be arrested for failure in PCR tests?)

“We have respected orders and followed hundreds of guardianships, respected the institutional order”, he indicated, pointing out that this case is a complex situation: “Especially in the third order limits the capacity of the public health authority to deal with the health crisis link the issue between the introduction of tests and the culmination of the emergency, which means that we can not develop the gradual that we have provided ”.

The critical debate is to what extent individual rights in an area of
a pandemic can have limitations, how the right to health competes
with work and mobilization. It falls in the field of public health,
which includes collective action, policies aimed at the whole
population, “he added.

(Also: The government claims that travelers should not present PCR tests)

In addition to the decision, he said, the complicating issue is the limitation of
the ability of the healthcare authority to maintain a comprehensive strategy in a
complicated subject like a pandemic.

Compared to other countries requesting the test, the head argued
health portfolio, “the epidemiological situation varies.” “Colombia has spread the spread of infection with a flattened curve, while in Europe, for example, there are peaks and there are countries that have very large differential effects and the borders are porous,” he concluded.

The Minister answered some questions on the subject

So, Minister, challenge or contempt?
Challenge. There will be no contempt, but it will be impossible to follow.

Why is it impossible to follow it?
As the judge in the second statement pointed out that he had already revived the previous administrative act with regard to the mandatory nature of the PCR test for international travelers. In that sense, the Ministry of Health does not need to take any further action.

Is it necessary to present evidence at this time?
Not at this time, as the deadlines have not been met. The rest is better to ask the judge directly.

Why have you been so cool about this decision?
The Ministry of Health is responsible for ensuring public health in all its dimensions and for formulating the respective strategies. For that, we have the support of experts. We are concerned that the scientific evidence and criteria for international healthcare organizations, such as PAHO, are unknown. The ruling undermines the health authority’s decision-making capacity, which is absolutely critical in a time of a pandemic.