Beijing Business News(Reporter Liu Yangpu Zhenyu) On December 6, in response to rumors that Volkswagen “successfully shut down production due to chip shortages” in China, the person in charge of the Volkswagen Group (China) (hereinafter referred to as “Volkswagen China”) told A reporter from the Beijing Commercial Daily that the new crown pneumonia epidemic The uncertainty that has arisen affects the chip supply of certain specific electronic car components, and the Chinese market’s complete recovery has further boosted demand growth, which has made the situation more serious and caused some car production to risk disruption.

It was previously reported that due to insufficient chip supply, Volkswagen’s two car manufacturers in China, FAW-Volkswagen and SAIC-Volkswagen, began to stop production. Among them, FAW-Volkswagen entered into a repeal in early December and SAIC-Volkswagen began discontinuing production on 4 December. The lack of vehicle chips this time will lead to the inability to produce the two main modules ESP (Electronic Stability Program System) and ECU (Electronic Control Unit), which are built-in computers.

Regarding the effects of the production stoppage, the person in charge of Volkswagen China told the Beijing Business Daily reporter: “We are following developments closely and have coordinated with headquarters and related suppliers to actively take countermeasures. At present, customer delivery of related vehicles has not been affected.” .

FAW-Volkswagen also responded to the media and said that the production of new cars has really been affected to some extent. The company is currently communicating with relevant suppliers, but it has not stopped production as rumored. SAIC Volkswagen also told the media that the global supply of chip markets is not an emergency, and the company has long been prepared for that. SAIC Volkswagen’s annual purchases are well planned and there will be no sudden stock problems that will cause production to stop.

Senior automotive analyst Zhang Xiang said that due to the effects of the new crown pneumonia epidemic, the global distribution of chip supplies has encountered some difficulties. industry. 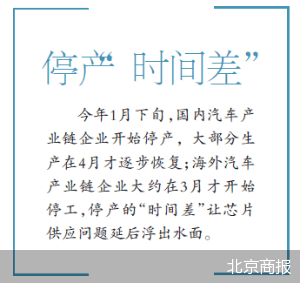 In fact, the global shortage of chips has already shown signs. It is understood that at the end of January this year, domestic car industry chain companies began to stop production, and most of the production was gradually restored in April. Foreign automotive chain companies first began discontinuing operations in March and the “time difference” for the shutdown delayed the chip supply problem. Ytad.

Recently, a price increase letter from the leading car manufacturer NXP (NXP) showed that due to the effects of the new crown pneumonia epidemic, NXP is facing the double effect of severe product shortages and increased raw material costs and has decided to raise product prices across the board. There is also news that Nissho Renesas will adjust the prices of products such as power management ICs from January 1 next year.

With the increase in electrification and intelligence in cars, the importance of semiconductor chips in the automotive industry has been highlighted. According to the data, semiconductor chips are widely used in multimedia entertainment systems, smart keys, automatic parking systems, engine and gearbox control systems, driving assistance systems, electric power steering, electronic stability systems, tire pressure control, power windows and other car parts.Return to Sohu to see more

Disclaimer: The opinions in this article represent the author only. Sohu is a platform for publishing information. Sohu only provides information storage services.