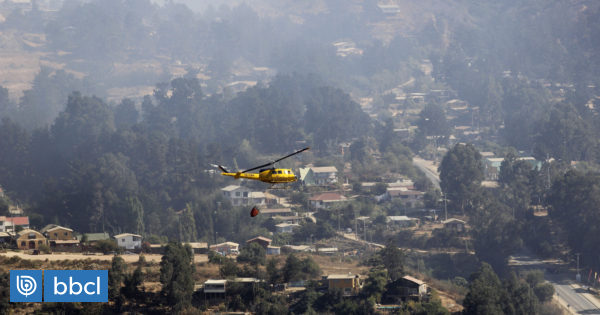 We gather more background on these news, stay up to date.

A forest fire occurred in Laguna Verde, Valparaiso, in the afternoon on this Sunday, which has consumed about five hectares (ha).

According to information from the emergency team, the accident was taken around 17:00, near Balmaceda costs, I founded El Sauce.

They would have consumed about five acres even though the fire is proceeding rapidly. Three fire trucks from Valparaíso, five brigades, a technician, four tankers and three helicopters were sent to fight the fire.

Because of this, a smoke column was generated, visible from different points of the city.

Ezio Passadore, Emergency Emergency Officer in Valparaíso Municipality, explained that the coordinated work in emergency teams has made it possible to combat the incident in a good way.

"The fire has fallen a lot in intensity in the last few minutes, mainly due to the airwork deployed by Conaf and the fire department in Valparaíso," said the municipality's official and added that there is currently no risk of suffering. La Pólvora road so it is unlikely that it will have to be cut.

It should be remembered that Red warning for the municipality for the fire at El Olivo farm, at the junction of La Pólvora road and Route 68, which is controlled but remains active.