General Motors announces the closure of plants in North America, thousands of redundancies and the end of several of their models

The American company, one of the largest and oldest in the automotive industry, announced Monday cut of about 14,000 Job in the usa and canada

The restructuring plan also includes closure of production in five plants of these two countries.

According to the company, the decision comes after GM cars have registered sales at a lower level than expected and production costs increased, including new charges on steel materials.

The message on Monday also reported that the production of several models will be interrupted: Buick LaCross, Chevrolet Volt, Cadillac CT6 and XTS, Chevrolet Impala, as well as versions of Chevrolet Silverado and Chevrolet Sierra. 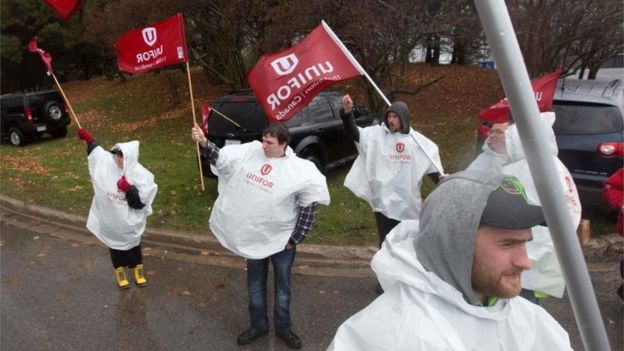 GM employees in Canada protested after reading that their facility is among those that will be closed.

In contrast, the production of trucks, electric cars and automotive vehicles was a priority for the company.

"The actions we take continue our conversion to be a very flexible, resilient and profitable company, while providing us withflexibility to invest in the futuresays GM President and Chief Executive Officer Mary Barra.

However, several trade unions expressed their direct rejection of the measures.

The announcement of this Monday No mentioned changes about Production in theplants of Mexico. However, GM said that by the end of 2019, the operation of two plants will be closed outside North America.

What is the restructuring?

GM estimates that this cut-off plan will provide a $ 6,000 million margin by the end of 2020, which represents a decrease of 15 percent of the number of officials and 25 percent of executive positions.

Three assembly plants will no longer be ordered in 2019: the Canadian Oshawa Factory in Ontario; and the Americans from Detroit-Hamtramck in Michigan and Warren, Ohio.

In addition, the White Marsh plants in Maryland and Warren in Michigan will also stop producing for GM.

GM is currently working on 54,000 officials in that region, which means that the cuts will affect more than 8,000 officials, in addition to the contractors in the facilities.

In February, the company said it would close a factory in Gunsan, South Korea. He also offered voluntary redundancies to about 18,000 workers in October.

What is the answer?

The message this Monday generated signs of refusal among workers and authorities.

"GM workers have been part of the heart and soul of Oshawa for generations and we will do everything we can to help the families affected by these news and get back on their feet." Yesterday I spoke with Mary Barra to express my deep disappointment at the end ".

"The taxpayers in Ohio rescued GM and it is shameful that the company is now leaving the Mahoning Valley and shooting workers just before the holiday," he wrote on Twitter.

Trade unions in the US and Canada also warned that they will push the company to distribute more work to the factories instead of closing them.

In Canada, Unifor Local 222 Union told its members: "To be clear, Unifor does not accept the closure of the plant as an inevitable conclusion."

"Remember, our facility has been in this situation before, without any product in the line and we could make a successful campaign to continue the business," he said.