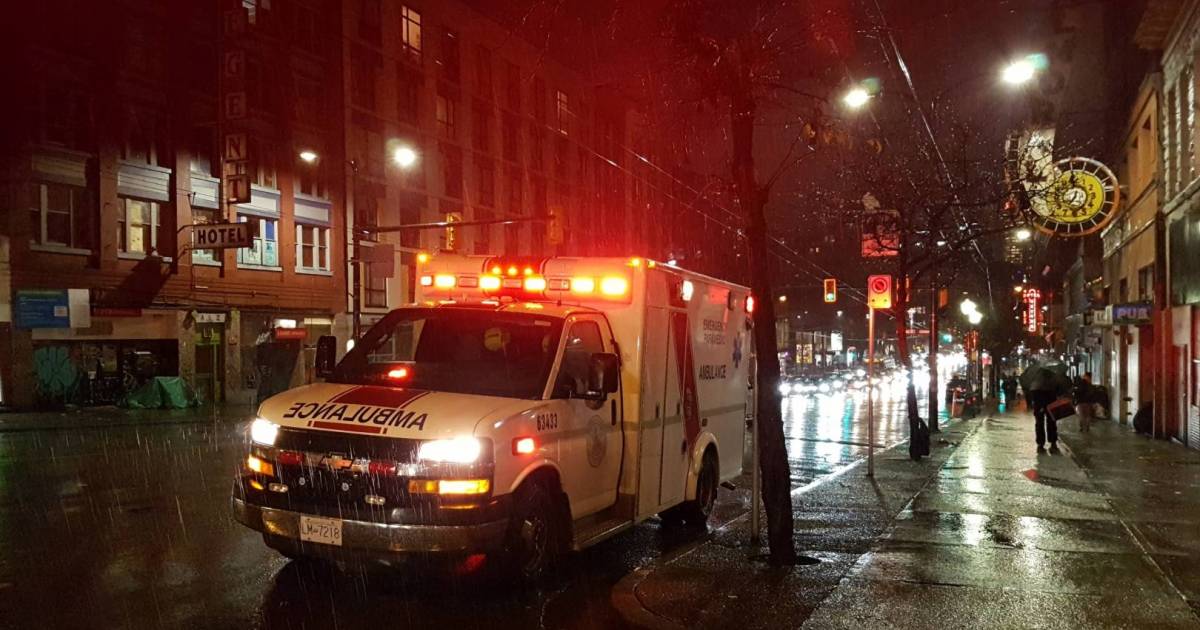 A major report on Vancouvers overdose epidemic says five years in the crisis, there is no end in sight.

"Despite the concerted efforts of government and community partners," the report begins, "Vancouver continues to be severely affected by the convergence of long-term mental health and drug abuse and increasingly powerful and poisonous drug supplies, creating a continuing overdose crisis that will claim the same number of lives in Vancouver 2018 as it did in 2017. "

The city's rate of overdose deaths is 58 per 100,000 people. It is high enough to rank Vancouver among the most affected areas in the United States.

"Vancouver continues to be the most affected city for the overdose crisis in Canada", notes the report.

The document is scheduled to go to the council on Thursday (20 December). It is the first major product of the mayor's overdose emergency group, a body like Vancouver's new mayor, Kennedy Stewart, established shortly after being elected office in October in October.

"With almost one person dying every day from overdose in Vancouver, this reality is unacceptable," said Stewart quoted in a media release.

While most of Vancouver's fatal overdose continues to occur in Downtown Eastside, the ratio of overdose calls to fatal overdoses is significantly greater than in most other areas in Vancouver, reports the report.

This indicates that the harm reduction programs used there – supervised places of consumption, for example, and investigation teams trained in overdose responses – seem to do their jobs.

Meanwhile in Kitsilano there are 18 calls for each death. In Fairview there are 11, in Mountain Pleasant there are 13, and in South Cambie-Riley Park there are 12.

In Kensington, a society that contains a concentration of surviving sex workers along Kingsway, there are only four overdose for each overdose death. It was due special attention from the city. "The gap in services and programs in this area has created barriers to accessing services and support for surviving sex workers, many of whom suffer from the crisis on opioids," the report says.

It repeatedly recommends that malware programs that have proven effective to save lives in Downtown Eastside expands to other parts of the city.

For example, in winter 2016, supporting homes such as the Atira Women Resource Society, the Portland Hotel Society (PHS) and RainCity Housing integrated monitored drug consumption areas for drug users, mainly decriminalizing drugs in their buildings. This has led to reducing stigma and promoting safer methods of using drugs. City personnel have now recommended that other non-residential housing providers and privately owned buildings copy these examples.

The report also recommends the city's work with provincial partners, including B.C. Center on Disease Control to make pure prescription drugs available to people dependent on opioids who risk their lives with fentanyl on the streets. Fentanyl, a dangerous synthetic opioid, is associated with more than 80 percent of fatal overdose in B.C. this year.

In a telephone interview, Jordan Westfall, President of the Canadian Association of People Who Use Drugs (CAPUD), described the report as encouraging, but criticized the review for failing to pay close attention to how the police and the criminalization of addiction exacerbate the crisis. (This characterization was confirmed in the report itself. "There were several members of the Working Group who expressed concerns that decriminalization of illegal drug addiction would be the fear of using illegal substances to keep drug users isolated," it sounds. "There was also concern about alleged arrests by low-level traders and how this affected people's access to a more trusted drug supply through their dealers was picked up. ")

"We are very disappointed that the city still refuses to discuss the role played by VPD in worsening the overdose crisis," Westfall said.

He also proposed the time for reports if the crisis has passed.

"We have been tasked with death in recent years," said Westfall.

Over B.C. It is projected that the province will see approximately 1,500 deadly overdoses this year. It is compared with an average of 204 fatal overdoses recorded from 2001 to 2010.

Karen Ward is a former Vancouver Area Network of Drug Users (VANDU) board member and has recently served as a consultant on drug use for B.C. Center for Disease Control. She criticized the report for lack of urgency.

"It does not recognize the constant distress in this neighborhood [the Downtown Eastside] must stop, Ward added Straight. "This means that the status quo in this area is good, and it is not."