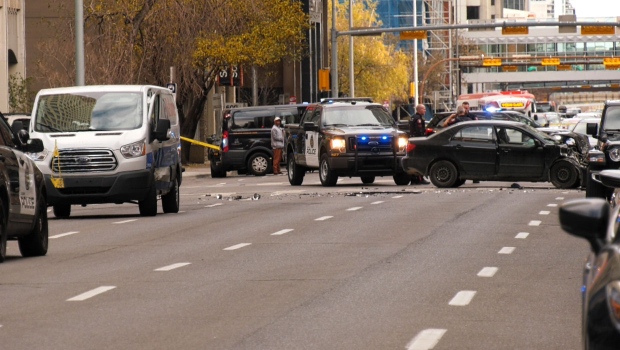 CALGARY – Members of the Calgary Police Service are working with national security partners after a pair of suspects drove a vehicle toward a military parade on Saturday afternoon.

Police attending the Freedom of the City parade at 3 p.m. first noticed a suspicious vehicle near 6th Avenue and 8th Street S.W. trying to drive around one of the barriers.

That's when one of the CPS officers, a 12-year member, opened fire on the vehicle, causing the driver to crash into a van, driven by a bystander.

Bonita Vance was in the area when the incident took place. She says she saw the suspect's vehicle, a black car, speeding down the road.

"It was trying to beat the red light, but hit the van instead. I saw the impact, I saw his airbag go off and that was it."

She says the driver of the van was not hurt because it was struck in the back end, but it was a huge impact.

"The guy in the black car was doing a good speed, smash, dead-on in the side of the van. That's all I saw."

Calgary police say no pedestrians were injured during the course of the entire incident.

Officials say the driver of the vehicle is a 22-year-old man and the passenger is a 28-year-old woman.

Both are in custody, but one remains in hospital and is expected to undergo surgery. There is no information as to the nature of the injuries.

Charges have not been laid against either suspect.

The scene has been cleared and the Alberta Serious Incident Response Team is investigating the police shooting.

ASIRT has been directed to investigate a @CalgaryPolice officer-involved shooting that occurred this afternoon and resulted in serious injury. Details to follow.

The CPS says they have made contact with national security partners, given the nature of the incident, but added there is "no indication of any links to extremist activity."