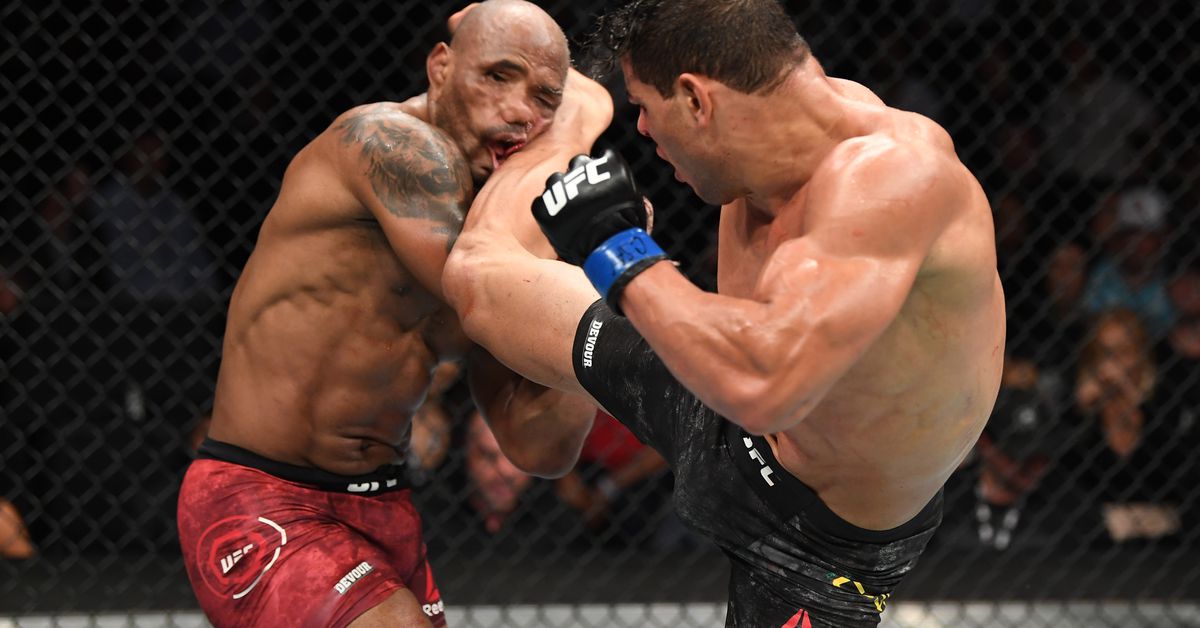 Any doubts people had about Paulo Costa being legit were blown away when the beefy middleweight went head to head against Yoel Romero at UFC 241 and came out the other end of three rounds with his hand raised (watch the highlights here).

There is a bit of controversy surrounding the decision, but far from a robbery. Either of them winning would have made sense, although we think Costa clinched it because Yoel was making strange stroke faces every time he ate a combo. You are not the kind of thing supposed to matter based on official judging criteria, but you know how it is. Yoel's constant jawing and gesturing sure was entertaining, but probably hurt him in the end.

Most guys survive fights against Romero by the skin of their teeth, so Costa not only surviving but making Romero look like the one in trouble was impressive. He certainly boosted the Brazilian's confidence, and he brought a certain swagger with him to the post fight press conference. The big topic of discussion: fighting the winner of the middleweight title fight between Robert Whittaker and Israel Adesanya at UFC 243 on October 6th.

"I think both of them are looking for me … scared," Costa said. "Because both guys now know they have a very, very tough guy looking for them. I think Whittaker will beat Adesanya, but … I beat Romero. For me, Romero won against Robert Whittaker. But if Adesanya won, takes the belt? MAN. I can kill that guy! ”

"He is very skinny, he does not have a chance against me," he finished. “Get personal with Adesanya. I think he will defeat. ”

As for why things had gotten personal with Adesanya?

"Because Adesanya talks shit about me too," Costa said, almost sounding surprised. "And after my last fight against Uriah Hall in 2018, he asked me to fight him and he says 'I can beat this!'"

Where is the honor in mixed martial arts? Even worse:

It took a long time before Adesanya heard about the press conference comments and decided to pour gasoline on that fire:

Make sure that only increases Costa's desire to kill this man in a legally sanctioned environment. But while murder is under consideration, stepping in at UFC 243 should Whittaker or Adesanya bow out is not.

“Well, now, absolutely now. Not backup, "Costa said." I trained so hard to be a backup. I train so hard. I need to confirm the fight to do my camp. My camp is wild, this jungle wild. Look, I forget to say in the Octagon, I broke my ribs this year. I broke two ribs at this last camp. I broke my biceps, clear off the leg. Man, this is crazy. I bring nine fighters to spar with me. Our guys go back home with injuries because of wild train camp. I can't be a backup. I need to confirm that fight to make my camp. ”

So expect to see Paulo Costa cageside in Australia come November, but it will be a while longer before we get to see him back in the cage. There was no promise from the UFC that next, but UFC president Dana White had nothing but good things to say about the Brazilian wrecking ball, which earned a $ 50,000 fight of the night bonus.

“It was a fun fight. Any way that fight would have gone you would have been like 'Oh my god, this is a robbery!' So it was that much of a war. That close and they both deserve the bonus money. ”