Ludogorets beat Slavia in a match in the 15th round of the efbet League. The champions won 2: 0 at the arena in “Ovcha Kupel”.

But the success of the citizens of Razgrad came in a controversial way. Kesheru’s first goal was scored by a foul in attack, made by referee Dragomir Draganov.

The champions doubled through Santana after a ricochet in the body of Milen Gamakov. Thus, Ludogoret’s leader remains with 32 points, 2 points more than Lokomotiv (Plovdiv) and two matches less. In third place is CSKA with 27 points.

The meeting began equally. In the 11th minute came the first dangerous situation of the match. Anton Nedyalkov played well and beat two of the “whites” and chose to pass to Kiril Despodov, who caught up and shot in the penalty area, but out. Gradually, the champions took the initiative and were the more active team on the field. In the middle of the half, Yanis Karabelov tripped Despodov.

The Eagles play hard at the arena in the Ovcha Dome

The former CSKA player committed a foul immediately and the ball is aimed at the door mount and misses a chance for his team. One minute before the end of the half, Cicinho shot perfectly with his chest against Chibota, who played well and shot very dangerously, but Vutsov showed an enviable reflex and rejected the blow and toasted Razgrad’s hopes.

During the second half, the guests completely dominated the field. With 48 minutes played, Chibota put themselves up 0 – 1 after an attack from the right, caused by a defensive blunder. The scorer was Antovski. A little later, the champions claimed referee Dragomir Draganov for a foul. Chibota advanced, but Patev stopped him according to the referee completely allowed. 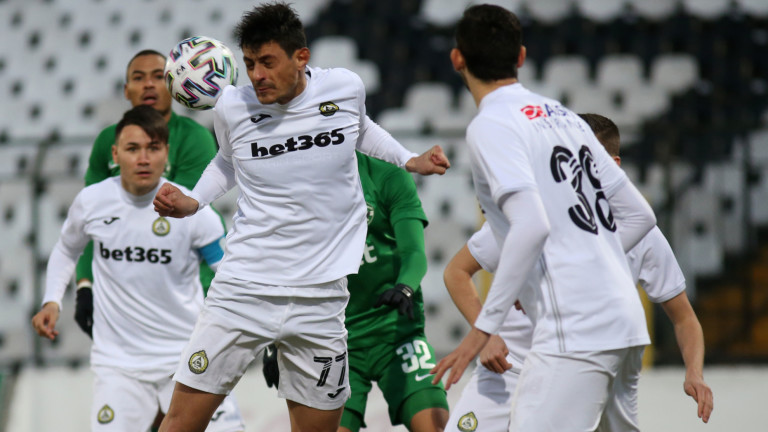 A minute later, the “whites” were dissatisfied. Karabelov made a pass to Rangelov, who was foul between the two, the hosts wanted a red card for Verdon, but Draganov only sanctioned him with a yellow.

With 65 minutes played, Ludogorets could have brought this one home for Ludogorets as he charged up on the left, but his hooked ball went just a bit too high. Kiril Despodov centered from a corner kick, Kesheru skipped over and pierced the “white” net. The situation left serious suspicions of crime after Verdon drove Bengyuzov with his hands and he fell. However, the judge was speechless and considered the case to be regular.

Eight minutes before the end of the match, Santana shot from the edge of the penalty area, the ball bounced in Gamakov and deviated from his path, Svetoslav Vutsov tried to catch, but failed and she went in his door for 0: 2.

Thus, Ludogorets recorded an important victory in the battle for the leadership position, which comes at an excellent time for the team that recorded 5 defeats in the Europa League.