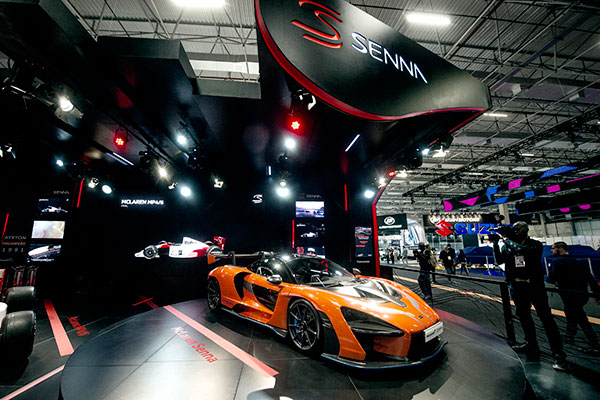 The thirty-first São Paulo International Motor Show, the largest car event held in Latin America, opened its doors on the 8th at the São Paulo Expo Exhibition & Convention Center. Trademarks reinforced their positioning towards urban mobility and its future development. Electric cars and hybrids, more and more connected, and autonomous models are the major highlights.

The Brazilian Motor Show, held in São Paulo, is a true car symphony, which appreciated everyone

The program was exclusively for the press on the 7th and opened its doors to the public on the 8th and expects to receive more than 700,000 visitors until the end of the 18th month.

What is new?
1. FIAT – With a brand new portfolio, "Fiat" gives boldness and innovation to the event. In a moment of resumption, the brand announces the investment of R 8 billion to 2023 in Brazil. It has 30 cars (concept models and invitations in versions not published in its elegant stand). Among the news, "Fastback", a beautiful concept car, representing the development of the brand; and the launch of the "Fiat Professional" area, a concept of differentiated services for professional customers, such as extended service hours, immediate replacement of spare parts and spare parts. The service is being launched in the first quarter of 2019. Another news is the first Digital Concessionaire of the Country, which has just been launched in São Paulo, where the big difference is the high technology that enables the customer to be autonomous self-service with digital navigation to know, select and explore Fiat models.

2 .KIA – Among the 14 launches, Kia Motors "Stinger GT" model, the sporty sedan that has many technological advances, including its high power and speed, reaches 100 km / h in 4.9 seconds. The KIA is evolving every year in Brazil and grows by 42% compared with 2017. With advantageous figures, it intends to import another 20,000 motor vehicles in 2019.

3. JEEP ® – Jeep ® invests in two new SUVs in the 2018 edition of Salão de São Paulo, with "Wrangler" and the new "Cherokee". Its launches include the unmatched 2.0 turbocharged engine, 272 hp and 8 gears. Another modernity of Cherokee is its redesigned and upgraded interior fitting décor, giving more space for the doorpieces. Wrangler will be available in the first half of 2019, while the Cherokee model is the automaker's commitment to the possible return of the line to Brazil.

4. Ford – With two vehicles representing its innovation, the Ford Auto Show takes two news that have technology as an important pillar. "Edge ST" Model 2019, the first SUV of the brand that owns the exclusivity of the "Sport Technologies" brand, invested in high performance and sportyness for the category and reflects consumer safety and connectivity. The model is available to Ford customers at the event. Ford also introduces "EcoSportTitanium", which should be the renewal of the EcoSport line. On the other hand, the stepper on the rear is excluded thanks to the technology "Run Flat Tire", which gives the tires different construction characteristics, which can even run at 80 km at speeds up to 80 km / h. In addition, Ford announces that it will come become the official automaker of the Rock in Rio 2019.

5. VOLKSWAGEN – The brand presents the first hybrid model to launch in the country, "Golf GTE". The car, which is a success on the European market, comes to Brazil in 2019. Volkswagen also exhibits T-Cross, a model that integrates the company's strategy to offer global vehicles with specific features to meet local needs of each region. It will be the first SUV manufactured by the company in Brazil. For this, the automaker received R 2 billion in investment. In addition, the brand develops a range of electric vehicles, based on advanced concepts and exciting style. "I.D. CROZZ" is 1st-CUV (crossover utility). Production starts in 2020, but the manufacturer shows an important early vision of his new family of electric mobile cars. By 2025, VW produces one million electric cars per year.

6. AUDI – Shows its renewed product line, which will soon arrive to our country. By the end of 2019, 13 new models, including transformation, new generations and unpublished, will be found in brand retailers. Audi announces that the new "Audi e-tron", the first electric car in the brand, has been confirmed for Brazil and arrives in the second half of 2019. Among the most important highlights the brand presents at the event are the three most luxurious models of family A: A6, A7 and A8 ". The new generations of the vehicles are more modern, full of onboard technology and provide impeccable finish. Another brand new car is "Q8", which becomes the brand's state-of-the-art SUV. These four models have one of the latest technologies in the company's engine line: the MHEV light system. Audi also shows the new generation of "RS 4 Avant", the most spicy version of the A4 family, debuting on the Brazilian market in early 2019, and will be the first model featured at Salão do Automóvel de São Paulo to reach brand dealers in Brazil.

7. TOYOTA – The brand presents futuristic and innovative models, celebrating its 60th anniversary in Brazil. The automaker uses the launch to strengthen the campaign to an inclusive and sustainable society, with investments in hybrid technology, to increase the mobility of the city centers. The Japanese brand presents "Concept-i", prototype vehicles equipped with artificial intelligence. It also shows motor units with "Yaris X Way" that will be in Brazil from 2019 and the "Hilux GR" pickup, which will be the first model available from GAZOO Racing in the Country, a edition limited to 420 units, which comes with a differential nassus pension, which gives more sportiness. Toyota has divided its stand by theme to facilitate visitors' mobility: Future Movement, Hybrid Technology, GAZOO Racing and More Toyota.