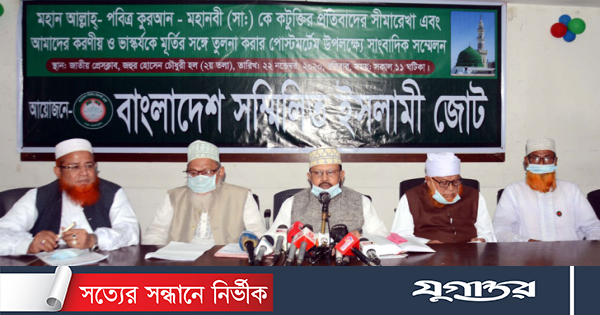 Bangladesh’s Sammilita Islami Jote has called it a dirty policy to compare sculpture with idolatry and call it shirk or foreign culture. Alliance President Maulana Ziaul Hasan said this at a press conference at the National Press Club on Sunday.

He said, ‘Bengali culture is not a foreign culture, it is our own culture. In this culture are suddenly called things that are celebrated without avoidance or a mixture of sharing with Allah, which is nothing but dirty politics. According to the hadith of Bukhari Sharif, idol is not an instrument of shirk. A small toy horse statue was kept in Hazrat Ayesha’s (ra) house. The Prophet (peace and blessings of Allaah be upon him) did not forbid it. These little dolls or idols were not for worship but for play. So the Prophet (peace be upon him) did not forbid it. In the same way, sculptures erected as a symbol of beauty and taste or as a memorial to a historical event are not forbidden according to Islamic teachings.

Maulana Ziaul Hasan said that sculpture and idolatry are not one thing. Do not try to warm up the field by misinterpreting the meaning of the words statue and sculpture. Because the people of this country did not make a mistake when they recognized you even in the year 71, they still will not do it. When a Muslim in Bangladesh pays homage to flowers at Shaheed Minar, National Memorial, Shaheed Buddhijibi Memorial, they do not worship or pray according to the teachings of Bukhari and Muslim Sharif’s Hadith ‘Innamal Amalu Binniyat’.

Mentioned that there are sculptures in different countries in the Muslim world, and the leader added that even the tough Wahhabi masters know that sculpting animals does not mean avoidance. There is a sculpture called The Fist in central Jeddah in Saudi Arabia, it is a hand-sculpture. There are also sculptures of horses and fish. Similarly, there are sculptures of horses and other creatures in Muslim-dominated Dubai, Iran, Indonesia and Egypt. It has been proven that whether the sculpture is of the living body or any part of the body, if it is not made for the purpose of avoidance or worship, there is no prohibition.

However, the president of the Islamic Alliance said that sculpting in the orthodox Taliban ideology was forbidden and that Hefazat was talking about introducing a completely Islamic ideology. If Hefazatis really opposes sculpture, they can demonstrate it in Khagrachari near Hathazari. There is a large sculpture of late President Ziaur Rahman on the outskirts of the city of Khagrachhari. By breaking this idol of man, they can prove how serious they are about it.

He said the purpose for which statues and sculptures are built will determine whether it is legal or illegal. Speaking to Charmonai Pir Mufti Muhammad Faizul Karim and Hefazat leader Mamunul Haque, Maulana Ziaul Hasan, “Go to Parliament with the people’s mandate to implement these anti-national movements and implement the bill.”

The president of the Islamic Alliance called for an end to mosque-centric policies and said: “The mosque is the house of God, it is our duty to protect its sanctity.” Dirty politics in the mosque, diplomacy, processions, movements, cocktails, bombs, attacking the police with the help of mosque microphones, snatching police weapons and beating them, throwing bricks and stones can not be a pious person. The same applies to mattresses. We call on the government to ban all political activities of militant supporters, religious and business organizations, including the Jamaat-Shibir Hefajati clique, in the Baitul Mukarram Mosque and its premises.

Arsha and Imran tied together with Sajjad’s “courage”

Australia is still on the verge of a run after Indian bowlers – jagonews24.com

After punishing him, he became angry at his older brother-in-law – the first light