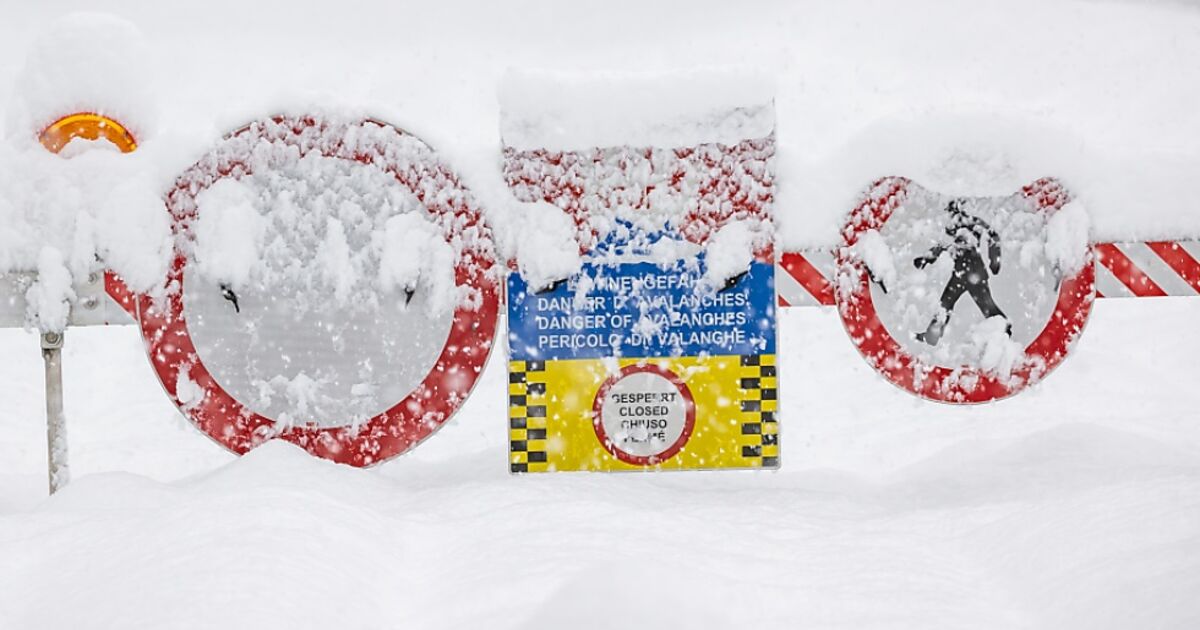 Very high avalanche risk with highest warning level 5 in Eastern Tyrol, huge amounts of fresh snow in western Carinthia and Upper Carinthia, amounts of precipitation sometimes in the record interval – Holle also bends his muscles on Sunday. Road and rail closures as well as mudslides did the rest in the regions of both states. But relaxation was predicted on Monday. Schools in the affected areas remain closed on Monday.

In all schools in Eastern Tyrol, there will be no lessons on Monday due to the tense weather, the state of Tyrol announced. This also applies to the rear Ötztal, it is said. Even in Upper Carinthia, some schools will not usually open on Monday. “Security first,” said Governor Peter Kaiser (SPÖ). But childcare in schools and kindergartens is guaranteed for children who come anyway, the state said on Sunday.

It is an event that only happens extremely rarely, but on Sunday morning it was time: the Tyrolean avalanche warning service “introduced” avalanche warning level 5, ie. very high risk, over Eastern Tyrol. Spontaneous avalanches can be expected from high-flow areas during the day, in some cases also extremely large, it is said. But at the same time, the head of the avalanche warning service, Rudi Mair, calmed down at least a little: Due to the relatively warm temperatures and sometimes a lot of rain, particularly wet avalanches can be expected, not dust avalanches. The latter would cause greater damage.

The fact that the avalanche situation in Eastern Tyrol is currently very tense was made clear by the fact that a record was released on Saturday night in Prägraten am Großvenediger. Four houses and a vehicle were damaged. People were not injured. Also on Sunday, there were currently other tiles with individual damaged buildings.

Otherwise, the rescue service had to fight on all fronts due to the huge rainfall in the state – in East Tyrol and also in North Tyrol along the main alpine ridge from Brenner to Ötztal: insulated mud and flooded basements and closure of railway and road. In Eastern Tyrol in particular, about 4,000 households were still without electricity on Saturday afternoon and will probably remain so for the rest of the day. Governor Günther Platter (ÖVP) assured financial support for East Tyrol. District Manager Olga Reisner appealed to the population to stay at home.

Due to the unfavorable weather conditions, Brenner’s railway line will probably be interrupted until Monday afternoon on both Tyrol (between Steinach and Brenner) and South Tyrol (near Franzensfeste), ÖBB informed on Sunday. Otherwise, where the weather allowed, a railway change was set up, it said.

In Carinthia, however, huge amounts of fresh snow meant in Lesachtal, Gailtal and upper Mölltal roads. At the same time, the milder temperatures at lower altitudes caused some slopes to slide and mud to slide blocked roads. According to the state press service, the SPÖ’s regional council and disaster inspector Daniel Fellner appealed to the population in all areas affected by the weather to stay in their homes.

All emergency vehicles from the road maintenance depots were in constant use to control the precipitation. Fellner asked the people of Upper Carinthia to follow the rescue service’s order: “Please stay in your houses and do not climb on the snow-covered roofs to shoot them freely”.

After avalanche slopes, some roads were closed, while snow chains were mandatory on others. During the afternoon and towards evening, the snow in Lower Carinthia increasingly turned into rain showers. For the night the precipitation was expected to decrease, but there would be some storm in the Karawanken valleys.

According to the first data analysis, the 24-hour fresh snow quantities at some ZAMG weather stations in the affected areas of the two federal states were within the record range. A “record” was even exceeded. In Umhausen in Ötztal (1,030 meters above sea level) it snowed about 80 centimeters from Saturday to Sunday, the record for 24 hours was 45 centimeters from October 2013. Measurements have been made here since 1956. It snowed on Brenner (1,400 meters) from Saturday to Sunday about 90 centimeters (record: 100 centimeters, measured in March 1975). In St. Jakob / Defereggen (East Tyrol, 1,283 meters) there was a snow cover of 110 centimeters on Sunday morning, in Döllach in Övre Mölltal (Carinthia, 1,071 meters) of 97 centimeters and in Sillian (East Tyrol, 1,081 meters) of 89 centimeters.

According to ZAMG, it snowed about 100 to 150 centimeters from Friday to Sunday morning on the mountains in Upper Carinthia, Eastern Tyrol and in the area of ​​the largest Tyrolean alpine ridge, sometimes a little more. About 50 to 100 centimeters of fresh snow will come here on Monday, according to the forecast. The Foehn storm still reached more than 100 km / h in the mountains on Sunday morning.

The situation in Salzburg

The risk level for severe weather has increased in southern Salzburg. The risk of avalanches increases significantly and floods are possible. Read more about this here.