This is Volt e1: the electric car designed and manufactured in Córdoba 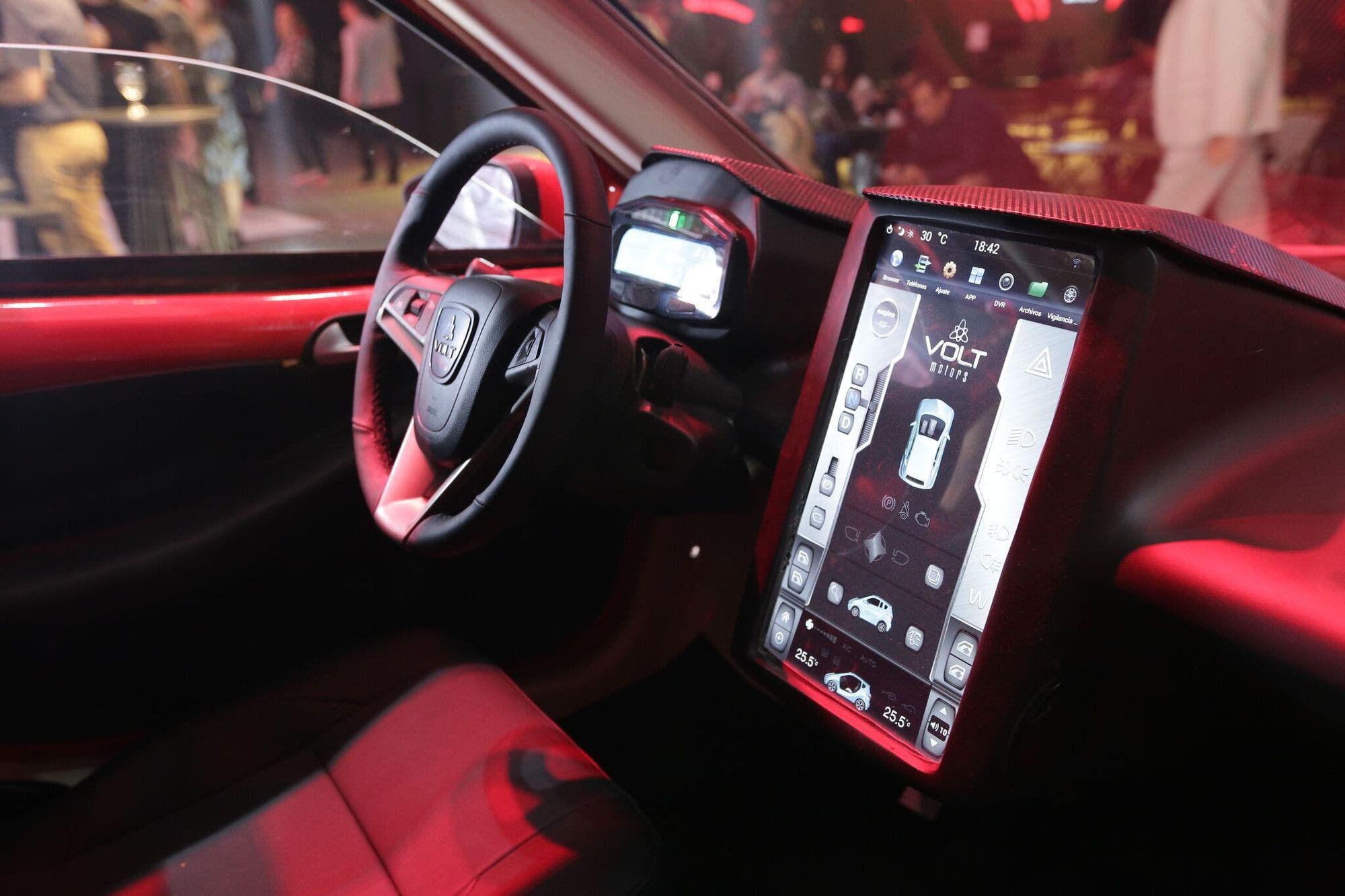 CÓRDOBA.- Volt e1 was featured in this city, the first City Car 100% electrically designed and manufactured in the country. Starting today, the first units of the small vehicle designed for urban mobility will be equipped with technology for comfort and safety. Due to its size and characteristics, it is in a different segment than
Sero Electric manufactured in Morón, which has the title of being the first Argentinian electric four-wheeled vehicle (although it only has two seats).

It has three doors, four wheels and a plug to charge it from home to a 220V outlet. It is designed to carry two adults and two children up to 12 years on the backside (the rear seat has Isofix hooks for highchairs), a luggage compartment with capacity for 300 liters of load and maintenance and user costs, according to the manufacturer, is 90% lower than for a traditional vehicle. With zero emissions of gases thanks to its electric motor and a maximum speed limitation electronically 110 km / h, it promises to be a good alternative to crossing Argentinian cities.

the
Volt e1 just got out of the community has some of the traditional car we usually see on the streets of Argentina, because it thinks from a technical company, so it's closer to a device coming from the internet than things from a car factory. .

The technology, developed in Córdoba, is used both in comfort and in the material used for monocoque construction: carbon fiber, kevlar and modified resins to make it resistant and lightweight. But at first glance, the pre-model still has some finishing features to improve and data that are still unknown: battery characteristics and specifications for the many features included in this model, such as the promise that the Driver's Guide will be available through an expanded reality application.

Everything in the car can be handled from an application on the mobile phone. The unlocking of the doors, the control of the windows, the lights, the device's location, battery level, remote contact or general state, until the operational updates received by the model over time. On the side of the board there is a 16-inch touch screen with Android 7.1 to control different parameters in the car.

It has an emergency button, 360º parking cameras with a "birdlight" effect that combines different pictures and presents them with a single view as if we looked at driving from a drone and proximity sensors and parking guards, including features.

Between the different braking techniques, it includes the regenerative – which makes it possible to convert a part of the vehicle's kinetic energy to battery power braking with a single pedal, airbag, AIP technology, LED lights in position and twist, and bi- xenon headlight and the ability to project data on the car's instrument on the windscreen, in order not to derail the steering wheel's perception.

The lithium batteries can be charged in six hours with a range of 150 kilometers, but you can add another and double to 300km. Fast blast, on the other hand, allows you to complete 80% of its capacity in just 30 minutes, but it's only possible with a supercharger. The maximum speed is 110 kilometers per hour.

With regard to electricity consumption, the company's account is 100 km walk to the price of a cup of coffee. An economical, because they calculated it at forty pesos. Is it, taking into account annual costs, the cost of operation and maintenance 10 times lower than a conventional vehicle, according to Volt. The efficiency calculated in operating costs is that a traditional car consumes 6600 pesos of naphtha if it circulates 1500 km / month (50 KM per day) but this model spends only 600 pesos. Thereafter, annual savings include $ 72,000 less operating costs, $ 33,000 less maintenance and $ 22,000 incentive for accommodation: 127,000 pesos in total.

The model weighs 550 kg and can transport up to 300 kg of cargo at a price of 750,000 pesos. The first 100 cars will have a bonus in the price of 80,000 pesos. The car will be on the street in April next year. Still need to know more about the car, see it on the streets and find out the test drive to see how your walk is. We will have to wait until 2019 to see the strength of Volt's idea and if, in one year, they reach their target of 3,000 manufactured units.

The company prepares a second model, tool type, called Volt w1, with space for a passenger, and designed to transport loads, transportation within a city and so on.

Volt Motors exists as such since 2015, although its engineers and mentors have worked for several years on various projects with social, economic and environmental consequences, and now they take one step further with the 100% electric city car. Thanks to the license granted by the Ministry of Production of the Nation, its plan for the development of technology and production of the first units was completed and may be approved, manufactured and patented from this year.

They work with various innovative partners offering, for example, digital insurance. "The car is safe from the factory with eZurich insurance, which is digital and has different benefits for the user, as a replacement car, etc. Even with SOS, which suggests another experience so that users can call mechanical support from a button," explains Volt VD Daniel Parodi.

Volt Motor's idea is to install productive and commercial cells in Buenos Aires and in the regions of Centro, Cuyo, NOA, NEA and Patagonia within five years. Extend even to neighboring countries with an initial investment reaching 200 million pesos and it is estimated that in the first phase approximately 500 direct jobs can be created.

The models that come out are sold online, without intermediaries. As business grows, stores will be installed, as they call them. The first one is located in Ciudad Empresaria, a technological post, also established by the company's CEO, where Cordova's headquarters in Intel, McAfee, Hewlett Packard, Mercado Libre and Trane include. This Silicon Valley is not due to Volt Motors. Here is the factory where they assemble the models, with national and imported components to the same extent.

Some local media call their creator, parody, the local elon musk. It is that this engineer born in the city of Córdoba has developed local innovation for years. Among his projects, the manufacture of missiles was somewhat truncated, but that was what gave life to the idea of ​​the electric car with the same search engine as the space industry: minimize the importance of maximizing the payload. Thus, this car was designed for a city environment, light, efficient and with low maintenance costs.