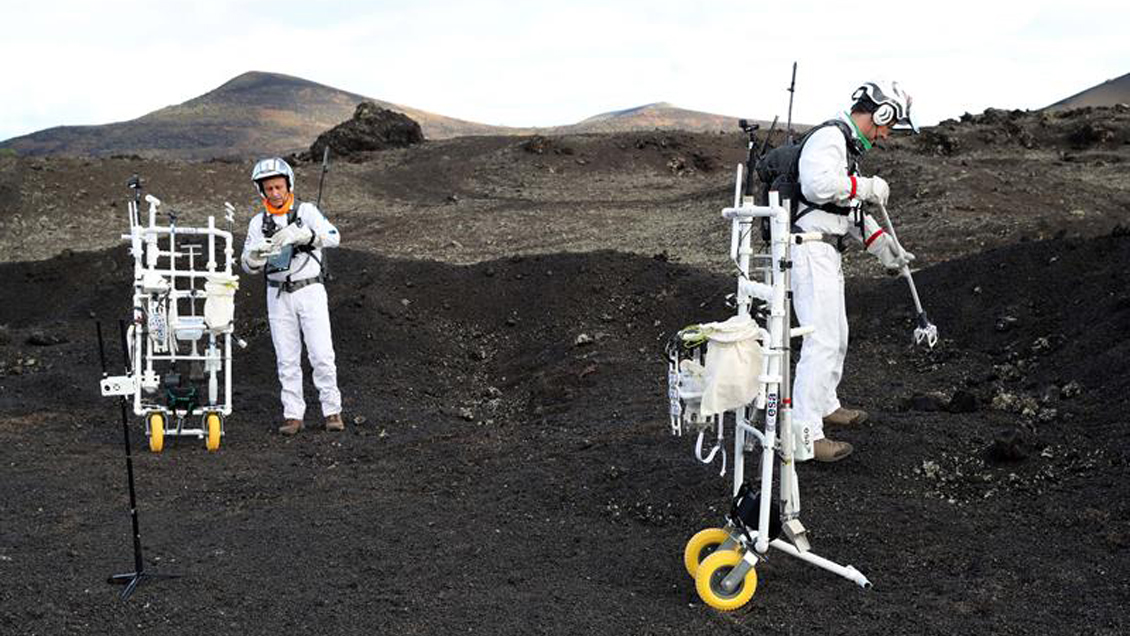 the The European Space Agency is testing these days in Lanzarote robots, tools and communications equipment that astronauts will use within a decade on the moon, developed to produce the technology used almost half a century ago, to the 21st century, in the last ofs Apollo mission.

A team of scientists, mission leaders and European astronauts trained for two weeks in the Tinguatón volcano (on the Spanish island of Lanzarote) how to behave in a quest to explore the moon, a target for NASA and ESA, which plans to return to the satellite within a decade.

This is the third consecutive year in Lanzarote in the "Pangea" program of the European Space Agency, which had hitherto used the landscape of Lanzarote as an analogue to design for a long time technologies for mineral recognition and seeking signs of life (present or past) on Mars.

However, ESA has reoriented this type of education to the moon, firstly because it is an objective already in the planning of the international bodies it cooperates with and, secondly, toDue to the technology that one day can take to Mars, it must be tested first on the moon.

those who Plans collide among other difficulties with the fact that the latest multi-propagation technology tested under real conditions was left in 1972, in the Apollo XVII mission, the last one who took a human to the surface of the satellite. And now it's not possible to test new systems in the laboratory, to get very reliable results you have to be on the moon … or almost.

"It is very difficult to find a place with the moon's properties on earth. In Lanzarote we have some very important, like this from Tinguatón. Like here, On the moon there are basaltic lavas and pyroclastic and a very similar composition"he explains Efe the Italian geologist Franceso Sauro, scientific director of the project "Pangea" for training in terrestrial analogues. A team of researchers, mission leaders and astronauts train in Lanzarote. (Photo: EFE)

The coordinator of the team that moves ESA to Lanzarote every year, its compatriots Loredana Bessone, specifies that the return to the moon will not be addressed, probably directly with the astronauts, but the first exploration robots will be sent to perform the first tasks and prepare the ground.

These days, the ESA astronaut Matthias Maurer Not only has he worked on volcanoes with updated Apollo era tools, but he also trained in remote control. From the Canary Islands he has run a man in the Netherlands.

Actually, Maurer says, it is a taste of almost definitely test with this kind of robots that will be performed in 2019, when one of your colleagues from ESA or NASA manages the international space station a rover located on the lapilli fields surrounding Timanfaya National Park.

By the way, the German astronaut has done a discovery as useful as unexpected: suit with which you work outside the spacecraft and with which you have trained in Lanzarote It is not enough.

The island's rocks, very similar to the mounds, his gloves have become a tower. If it had happened to a real mission, he warned, The astronaut in question would have been in danger.

Matthias Maurer also explains the meaning of returning to the moon: among others he says, get to know the earth better, but nobody is forgetting The big space agencies want to go to Mars in this century, something unpleasant at this time.