Macri asked mayor not to spend more than they have 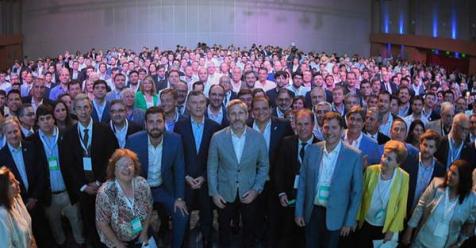 President Mauricio Macri urged community leaders to be "responsible" and "do not spend more than they have" and urged them not to create "distorting taxes" on local businesses and industries.

The state's chief, when speaking before local leaders attending the second National Intentional Forum of Intentions in the Buenos Aires Exhibition Center, urged them to "make responsible management", meaning "not spending more than they have" because "it is not the same thing to do things well or to do them as they were always done, through the trap and the shortcut. "

In that plan, together with the Interior Minister, Public Works and Housing Minister Rogelio Frigerio, Meeting Organizer, Macri also said that "we forbid something that made us believe in the last decades: that budgets and information statistics did not exist publicly, that was what we could draw and that at the end of the day did not matter if the goals were met or not "

On the other hand, "political parties have an ongoing debt, and I mean women, because of 2300 municipalities, are only 120 led by women, and the truth is that they are very few, and we need more" when addressing the municipal conductors.

Among those who participated in the event attended by all government officials were the mayor of the capital, Norma Fuentes. Also his colleague from the city of La Banda, Pablo Mirolo.

In addition, he shared realities with municipalities across the country, allowing sharing of knowledge and experience.