How the system works to bring tax-free items, following changes to AFIP

The bodies led by Leandro Cuccioli raised the limit from which 50% must be taxed for the surplus. Details of the action

After deciding that notebooks and mobile phones purchased abroad would no longer be explained by tourists upon their return, AFIP took another step in that direction by announcing that, as of this Thursday, The tax-free allowance will be increased for the goods purchased by passengers outside the country.

For its part, the action is maintained by which children under the age of 16 have a franchise for half of the amount.

Sources of the organism detailing that the international amount is equal to what is allowed for Mercosur revenue and for the free shop purchase franchise, equivalent to $ 300 in 1994, when the cap was fixed but adjusted for the dollar inflation.

"This action is based on the Council's Joint Council's decision last month to renew the amounts for the handling of baggage by passengers crossing the customs, in order to harmonize and consolidate the Customs Union. Argentina matches the values ​​of the Brazilian franchises"they pointed out from AFIP.

A statement adds that no changes are considered in the limits of the entry and exit of foreign currency and securities, regardless of means of transport.

On AFIP's page, there is a general wizard that helps you understand how the system works:

1. Which goods can be entered without paying taxes?

Clothes and personal items used are exempt from barriers, including a laptop that does not require an external power source (notebook or tablet) and a mobile phone, as well as books and magazines for the traveler's use.

2. What are the exceptions and franchises when you enter the country?

The traveler entering the air or sea will have an exception for other items up to the limit of $ 500 or equivalent in another currency and leave their excess – provided they fit in as luggage – subject to payment of a single tribute with an aliquot of 50%. At the border, the franchise will be up to the limit of $ 300. In order to enter the country, it will also be regarded as a land border when made with river or bridges.

Travelers, according to the agency, They will receive an additional deduction of $ 500 or equivalent in another currency, taking into consideration the goods acquired in free stores (free transactions) on arrival, remaining surplus is subject to payment of a single tax with a 50% portfolio.

From AFIP, they emphasize that the use of each of the franchises with the previously established amounts "will be calculated in a single form, can not be compensated between them". In addition, "franchises may not be used more than once a month."

3. Are franchises cumulative or transferable?

The franchises established in favor of travelers are individual, non-transferable and non-cumulative. But when travelers constitute a family group – spouses and children under the age of 16 did not emancipate – The franchise can be used jointly, even when there is a single article.

4. How is the declaration of imported items made when traveling abroad?

According to AFIP, goods originating in third countries transported by residents in their luggage must be registered by the customs office so that they do not require payment of taxes levied on importation for consumption when returned.

To do this, passengers must present the goods at the customs (may be at the airport or leave the country) to receive the receipt, which must then be shown if requested on return.

While it is important to check this before leaving, it is true that There are models of tablets, cell phones and laptops that no longer need to be registered.

5. Can you come up with an unlimited number of electronic items without paying taxes?

No. Although a regulation published at the end of September stated that mobile phones, notebooks or tablets are part of the personal use items that are exempt from payment of fees and it is not necessary to declare there are certain limits.

thus, Purchasing abroad by a notebook or tablet, plus a mobile phone is free from paying the fee. So that the said products will not consume the established franchisees for imports of U $ S 500 for adults and U $ S 250 for minors (on arrival at sea).

But if a tourist does not buy a mobile phone abroad but goes in with two laptops, The second new device must be declared and the value will be taken into consideration for the franchise of $ 5,500. In case of exceeding this limit, 50% of the excess amount has to be paid.

This action taken by AFIP takes place in a context where emissive tourism is from a serious blowAfter the jump in the dollar and the decline in purchasing power, it fell sharply in the number of Argentineans traveling abroad, while the costs of a card in foreign currency collapsed.

According to central bank data, the balance of plastic purchases decreased to U $ S260 million in early October.

This figure is the lowest for more than four years: You must go back to September 2014 to find a lower level. In addition, it is a collapse of 70% relative to the last peak, registered in early February last year. 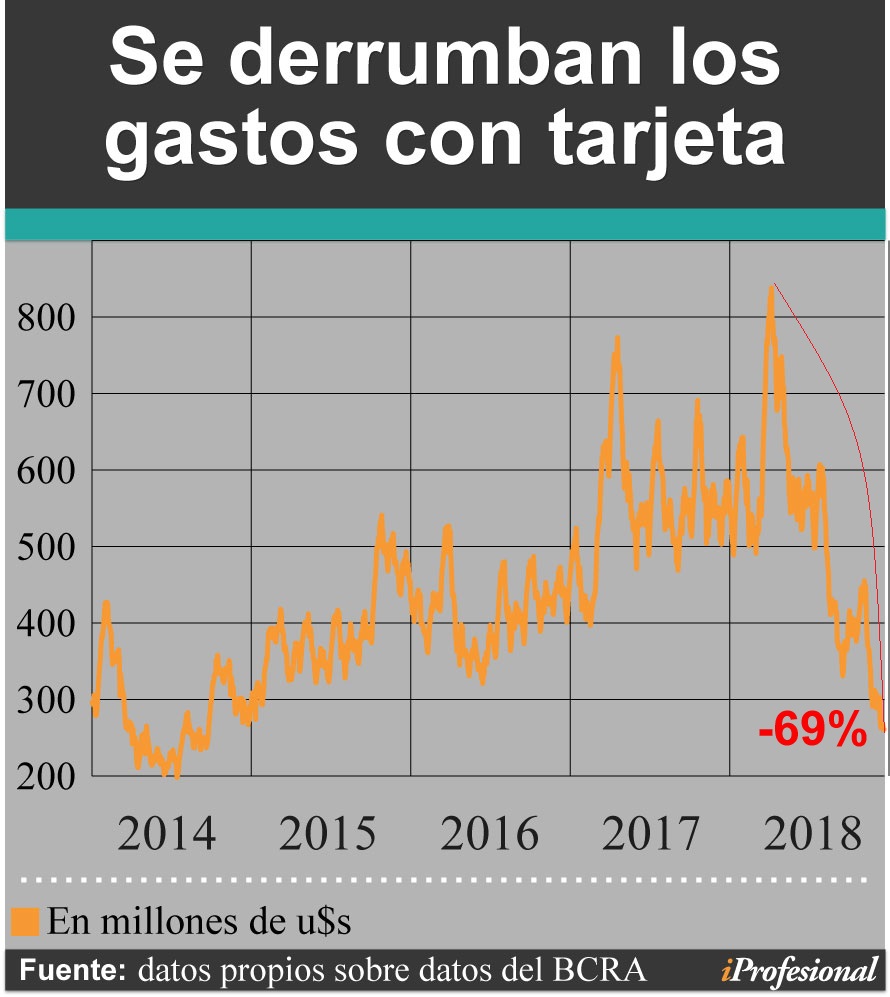 As regards the development of the tourist balance, the high deficit began to take place at a time: between January and August 2017 the red had reached 7.38 billion dollars.

On the other hand, imbalances decreased during the same period this year to $ 6 766 million, a decrease of 8%.

Find out about the latest on digital economy, start, fintech, business news and blockchain. CLICK HERE